The tournament bracket for the 2022 Disc Golf Reviewer World Series of putters is here and we are ready to roll! All 64 putters have been chosen and seeded into four 16 seed quadrants, and the first round of reviews and matches have begun! You can find links to the results and learn more about how this competition between putters is being run and scored at the main World Series of Putters post. We will keep that page updated as the competition unfolds.

Below is a summary of all the putters that will be included in this competition and how they have been placed in the World Series of Putters bracket. 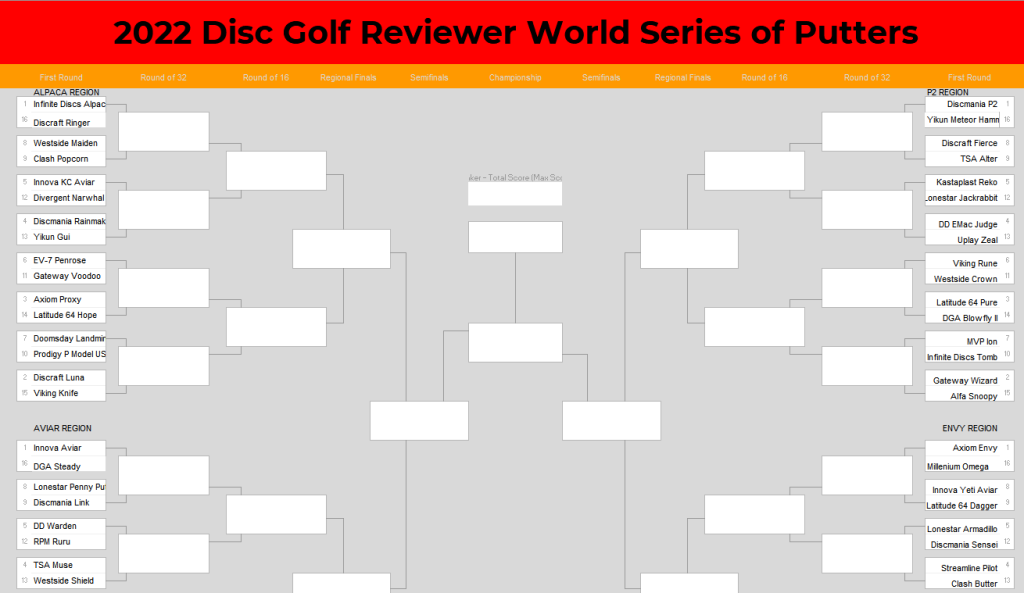 As I mentioned in our initial post, we referred to recent and historical sales data from Infinite Discs as we determined the seedings for our bracket. We made adjustments throughout in order to try to set up intriguing first and potential second round matchups where we could, and we were able to make sure no two discs of the same brand will be matched against each other in the first two rounds.

These initial seeds are by no means meant to be a reflection of how “good” we think the putters are or will perform in our competition. I anticipate lots of mayhem and “upsets” throughout this competition, because I know these seeds mean very little in the actual value of the molds we will be testing.

So if your favorite putter is a lower seed, no need to be offended! We think all of the putters we’ll be testing are fantastic, and we look forward to being surprised as the competition plays out!

In the top left quadrant of the bracket we have the Alpaca Region, named after our number 1 overall seed as the top selling putter at Infinite Discs, the Infinite Discs Alpaca. Those sales numbers may be skewed a bit since it is an Infinite Discs branded mold, but there is no denying the Alpaca has been a very popular mold since its release. And here are first round matchups for this region: 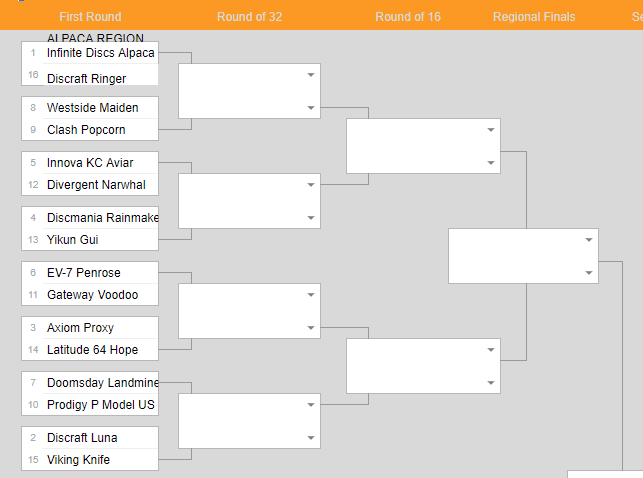 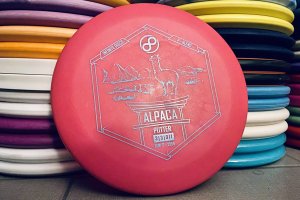 I think this region is one of the most fun regions in the event because there is a lot of representation from lots of different brands of discs, including some of the newer and lesser-known brands like Clash, Divergent, Yikun, and Doomsday. We also have several newer releases in this bracket like the new Eagle McMahon Rainmaker and the Latitude 64 Royal Sense Hope.

Most Intriguing Round 1 Matchups

The matchup I’m most looking forward to in this bracket, and perhaps in the whole tournament, is the 6-11 match between the EV-7 Penrose and the Gateway Voodoo. Gateway makes all kinds of discs, but for years they owned the putter market with their high-quality plastics and molds. EV-7 is a hot brand-new putters only brand that just started up in the last year. So for me this is a case of “new school vs. old school.” I’m fascinated to see how it plays out.

The 7-10 matchup is interesting just because I’m anxious to try out what might be the most unique/strangest disc in the competition, the Doomsday Landmine. It is a wide, tall, weird looking piece of plastic that initially looks like it belongs on a dinner table more than a disc golf course, but it has been flying off the shelves, so I’m very excited to see if it is a true contender on the putting green.

Let’s move now across the bracket to the top right quadrant we will be calling the P2 Region. The new Discmania P2 made in Sweden by Discmania has really done a great job building off the popularity of the original mold, as the P2 continues to be one of the biggest names in putters. 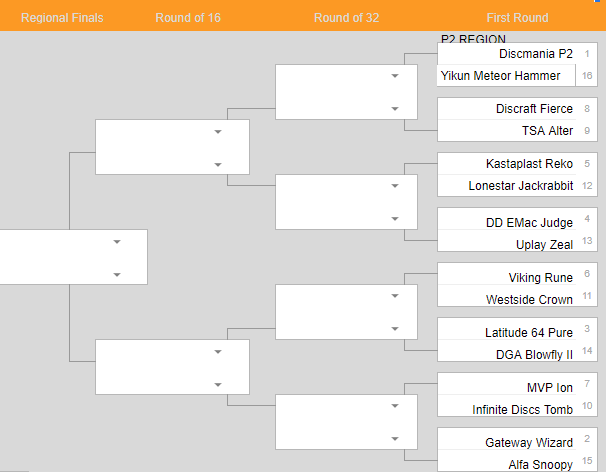 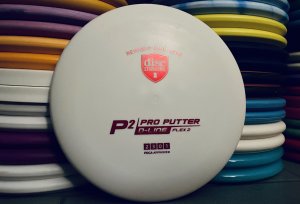 There’s a lot to look forward to in this bracket. Minus the Blowfly and Meteor Hammer, this bracket primarily features more traditional looking and feeling putting putters. That being said, there is still a lot of variety in terms of stability, height, and beaded/beadless molds. Should be an interesting and competitive quarter of the bracket.

Most Intriguing Round 1 Matchups

I’m drawn to the 5-12 matchup here between the Kastaplast Reko and the Lonestar Jackrabbit. Though they are made on two different sides of the world, Lonestar’s recent rise in popularity reminds me of the hype around Kastaplast a few years back. They both developed a loyal following due to their high quality and unique plastics and molds that are a lot of fun to throw. Seeing them matchup in the first round should be fun.

I’m also excited to see the Wizard and the Snoopy matchup. Again, this feels old school vs. new school to me. Can a new start up like Alfa dethrone the top Gateway mold in the Wizard?

To the bottom right quadrant we go for the Envy Region. The disc responsible for the “Holy Shot” is often thought of as an approach disc, but the beautiful Axiom Envy is also no stranger to the putting greens either and felt worthy of one of our number 1 seeds. 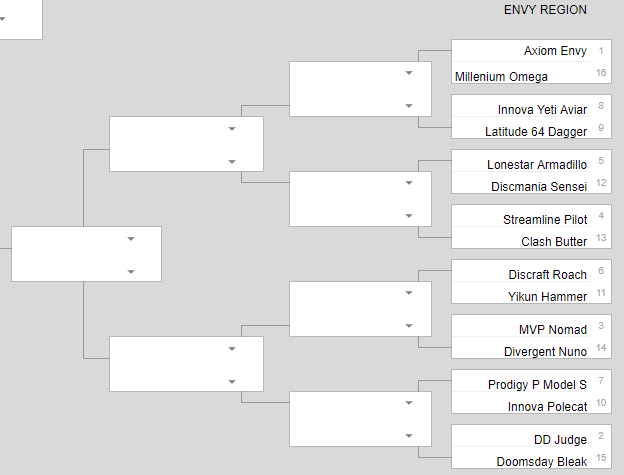 This region feels like the region of opposites. There are lots of mismatch styles of discs matching up against each other like the Yeti vs Dagger, Armadillo vs. Sensei, and the Polecat vs. …well, the Polecat would be the opposite of most any disc, wouldn’t it? How will these mismatch discs perform against one another? I’m excited to find out. 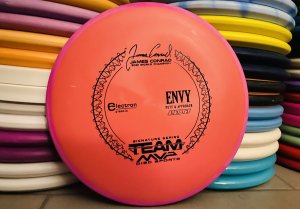 I mentioned this one above as well, but I really like the Yeti Aviar matching up against the Dagger. The Yeti is known for its concave top while the Dagger is known for its tall, deep-dish molding. Really curious to see how they perform when compared head-to-head.

I said to expect upsets, and I think this 1-16 matchup is pretty juicy. The Omega has been around for a while and has its loyalists (who would be very mad at us for the 16 seed), but it just hasn’t performed in recent years in terms of sales. But it is still a fantastic mold that has just as good a chance as any (but so is the Envy of course).

Last but certainly not least is the Aviar region in the bottom left quadrant of our bracket. The Innova Aviar is the old reliable among our 1 seeds. If you’ve played disc golf, you’ve probably thrown an Aviar, and the odds are you probably liked it. 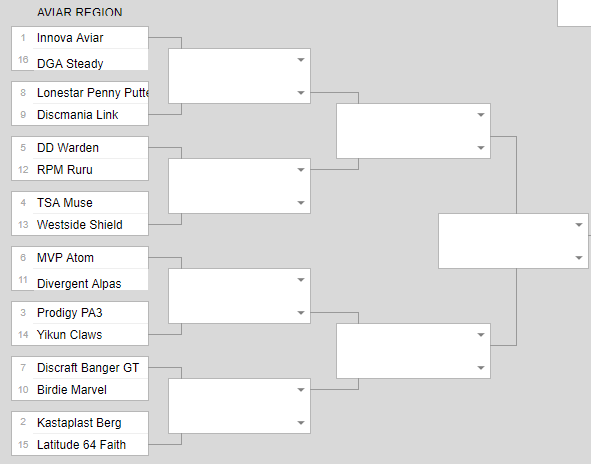 This is another fun and diverse region with lots of brand representation. The top half has a lot of more traditionally shaped putters, while the bottom half features a few different unique molds that could make for some really fascinating round 2 matchups if they make it through! 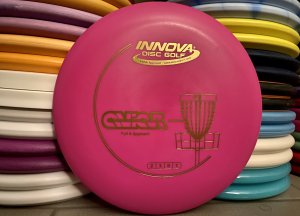 There are a few here, but I have to start with the 1-16 because I think it might have the most potential in the whole bracket for a “big” upset. The Steady like the Omega is a fantastic putter that just hasn’t sold as well in recent years. This matchup also carries some history with it as the Steady is named after “Steady” Ed Headrick and the Aviar is the face of Dave Dunipace’s Innova. This is going to be a fun one to follow.

The 5-12 Warden vs. Ruru catches my eye as the Warden is one of Dynamic’s flagship putters and the Ruru is the only disc representing the recent startup out of New Zealand, RPM Discs. And as mentioned above, all of the last four matches feature a unique/novelty type of mold, and I’m just interested to see how many of them end up making it into the next round.

Here is a downloadable version of the full bracket if you’d like to follow along. Also use this version of the bracket to create your completed bracket for the Infinite Discs Sponsored Bracket Contest (now closed since the competition has begun, but you can still download and fill out and follow along for fun!).

And there you have it–all 64 putters and all 32 first-round matches! If everything goes as planned and my arm doesn’t fall off, we will post one match result every day until the first round is completed.

After the first round is done, we will immediately start into the second round and keep on going until we have a winner sometime in November/December. We will make sure to update the main World Series of Putters page with links to all the new posts, so bookmark that page if you’d like to follow along.

This project is a huge undertaking, but we are very excited to see the results and to hopefully provide fun and helpful information to the disc golf community. Please share with your disc golf friends that you think would like to join us on this journey! 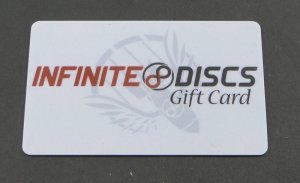 Infinite Discs is offering a $100 Gift Card for the most accurate bracket. This contest is now closed as the first review and match result between the Infinite Discs Alpaca and the Discraft Ringer has been posted If you missed entering the contest, you can still download and fill out a bracket for the fun of it if you’d like. Good luck to all those who filled out a bracket! 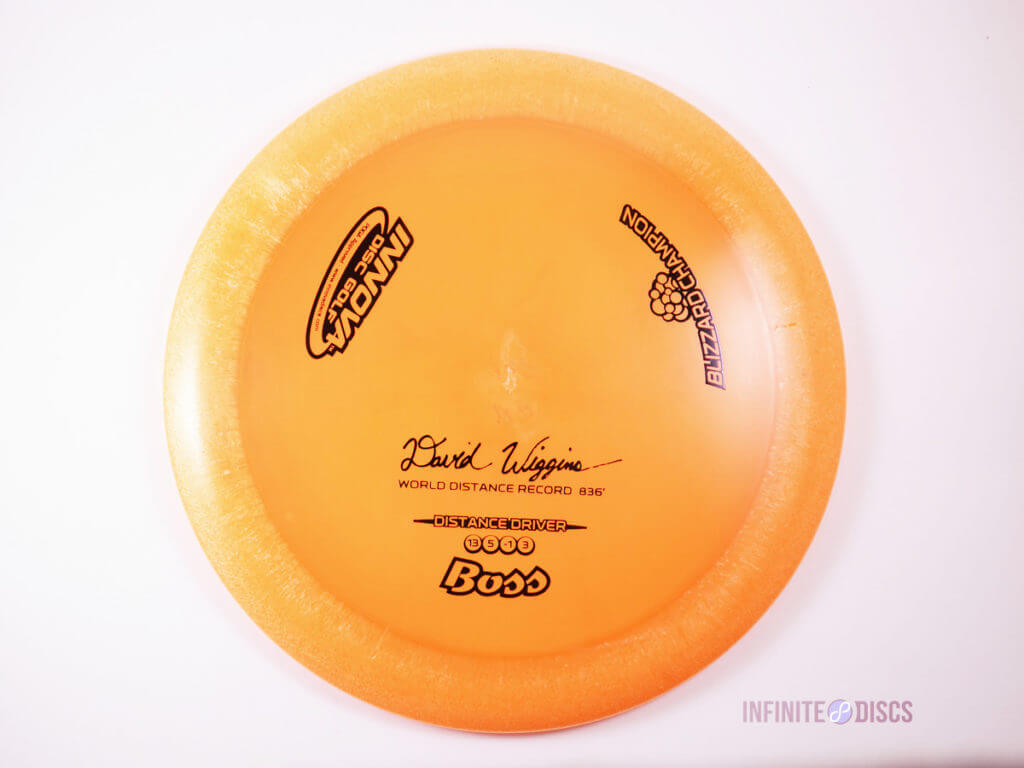 The “Aviar” is the classic Innova Putter that comes in a lot of the starter sets.  There are several differnt variations of the Aviar: Classic… 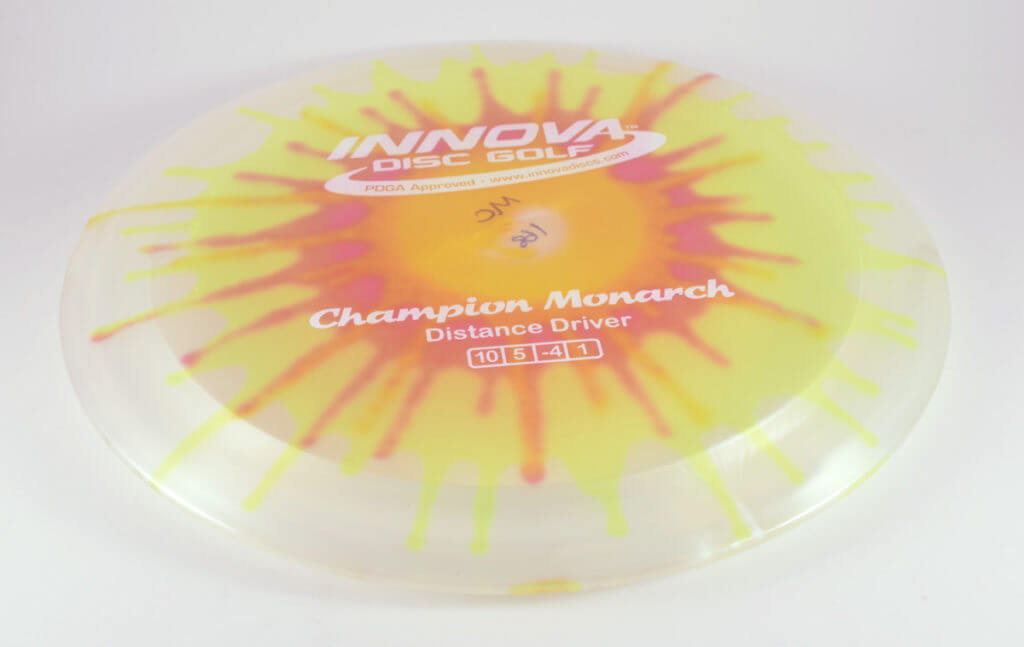 The Monarch is an under-stable distance driver made by Innova with an indented groove in the rim. Innova gives it a speed rating at 10,…