The first round of the Disc Golf Reviewer World Series of Putters continues its march to find the best putter in the world today. This is a project where every day I test two putter molds against one another on the putting green in a head-to-head competition and then post about my experience and the results. Today in the Envy Region of the tournament bracket we have the 6 seed Discraft Roach going up against the 11 seed Yikun Hammer. Let’s start by getting to know each disc a bit better. 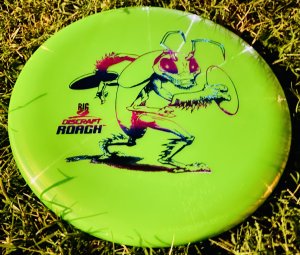 The Roach was Discraft’s Ace Race disc for 2015 and has been a popular putt and approach disc ever since (despite its horrible name). I personally don’t know what the marketing team was thinking when naming this disc, but the design team had it figured out as the Roach is a really nice feeling and flying disc.

The Roach has a thick, rounded rim that is beadless and maintains a round edge on the bottom rather than a sharper cut up toward the flight plate. The Roach is tall and domey with plenty of glide. I give the name a hard time, but I’m pretty sure it was originally intended to be a play on the word “appROACH” since this disc is designed to be a great approach disc. It is just that, but it has proven to be a popular choice for the putting green as well.

In the match today I used a Big Z Roach. Big Z is not a traditional putter plastic. In fact, it is one of the most durable and least grippy plastic blends in the Discraft lineup, so it will be interesting to see how the more premium plastic blend might influence the Roach’s performance.

We’ve seen and will continue to see quite a bit of Yikun Discs in the World Series of Putters with both discs released as part of the Yikun brand and discs that other brands have contracted Yikun to manufacture for them. Today we have another one of their uniquely designed putters in the Hammer.

The Hammer mold features a sort of thumbtrack and blunt edge that makes it look and feel somewhat similar to the Lone Star Armadillo that we just tested a couple days ago. But the Hammer also has a flat line or sort of “speed bump” on top of the disc that runs just inside the initial thumbtrack drop from the rim.

The Hammer is also more overstable than the Dillo and is designed to fly and feel more like an Innova Rhyno or the newly released Dynamic Discs Sockibomb Slammer.

Today we tested the Hammer in Yikun’s base Tiger Line plastic blend.

While both of these discs were designed to be used as approach discs, they are shaped and fly completely differently from each other. The Roach is meant to be a very straight and stable flyer that resists turn and fade with lots of glide. The Hammer on the other side is designed to offer a slower overstable flight that can be relied on to fade hard at the end of its flight.
Grip is an interesting aspect of this matchup as well because of the Big Z plastic blend being used for the Roach and the more unique thumbtrack design on the Hammer. Big Z is a pretty stiff plastic mold that felt very firm and durable with the thick design of the Roach, but grip is not its strong suit. I would trust this Big Z Roach off the tee and on approach shots with no hesitation, but the putting green gave me some concern. I really struggled to find a comfortable grip on the Hammer. I felt like the “speed bump” part of the thumbtrack was right where I wanted to place my thumb when throwing the disc, so I couldn’t decide if I should move my thumb inside or outside of that spot to get a better grip.
It is also worth noting that the Roach is significantly (.3cm) taller than the Hammer. The Roach feels very tall in the hand, and while the Hammer does feel shorter than the Roach, I do think it feels a bit taller than it actually is because of the blunt edged thumbtrack design of the disc. 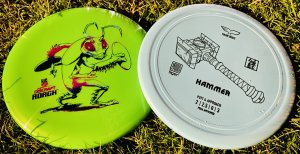 For more info on the format and scoring system I used to test these putters against each other, be sure to check out our main World Series of Putters post.
I conducted today’s match in the early morning just as the sun was coming up on a beautiful day. After warming up with both discs, a coin flip determined that the Discraft Roach would go first on the first set of putts. Here is how it all played out:

After yesterday’s one point match, we have another one today. The 11 seed Yikun Hammer did just enough to take down the 6 seed Discraft Roach by a score of 42 to 41. 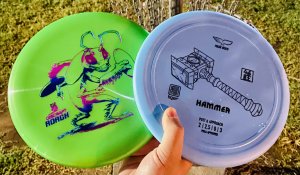 For the first time in this World Series of Putters event, I have found enough evidence to always recommend not using a premium plastic blend for your putting putter. The plastic blend cost the Discraft Roach this match; there is no doubt in my mind.
I made note of 3(!!!) dreadful spit outs during the match that were right on target and slide right through the center of the chains and out the backside of the basket. There were also a handful of putts that missed a touch to the weakside and the strongside that missed, and I think at least a couple of them would have fallen had they been thrown with a grippy putter plastic.
I also didn’t love the grip on the Big Z Roach, but that feels like a moot point because of the spit outs. It doesn’t matter if you like or don’t like how a disc feels if it can’t be trusted to grip the chains. Maybe other slightly grippier premium blends like ESP or Ti would be less likely to spit out than Big Z, and maybe the spit outs won’t happen quite as often as they did for me on this test. But why risk it? Save yourself the pain (and usually some dough) and go with a base plastic putter.
The Yikun Hammer was fine overall, but definitely not my favorite. I had to adjust and account for the discs overstability and slow speed on the putting green, but it was workable. The bigger concern for me was navigating the grip like I mentioned above. Different hand sizes and grips might not have this issue, but if I wanted a thumbtrack style putter to putt with, I’d probably look to get one with a simpler design than the Hammer.

The biggest recommendation to come from this match is to not use premium plastic blend putters for your putting putter. If you do already because you like the feel of the disc, I think you need to really think about how you want to value a plastic blend you like/are used to versus the value of a slightly improved chance to avoid spit outs. The way I see it–I can learn to like a plastic, but my disc can’t learn to like the chains any better.
For putting putters, I’d still choose the Roach despite these results. I’d just make sure to get it in a gripper base blend like the beautiful Bro-D Swirl blend Roach.
In the next round, the Yikun Hammer will take on the winner of tomorrow’s matchup in the Envy region between the 3 seed MVP Nomad and the 14 seed Divergent Nuno. See you there!
5/5 - (4 votes)

ELEMENT DISCS is one of the newer boutique or “craft disc” makers in the market. They kicked off their brand with a pair of really nice putters…