Prodigy announced the release of their new Ace Line disc golf discs yesterday. These new discs are designed by the experts at Prodigy, but unlike their normal Prodigy disc line manufactured in Georgia, these discs are manufactured in China. Prodigy owns the overseas factory and is in full control of the quality of these discs. Essentially, these are great Prodigy discs, but with new molds and a cheaper price. Prodigy has been working on this project for over two years and the new Ace Line discs will be released on December 12th.

In this video, Will Schusterick talks about the release of this new line of discs.

Last year Discmania made a big splash when they announced their partnership with Yikun Discs. Prodigy has taken this overseas approach to disc manufacturing to a new level. Being that Prodigy owns the overseas factory, I wouldn’t be surprised to eventually see all of Prodigy’s discs manufactured in China.

What is the Quality of Ace Line Discs Like?

I was fortunate enough to get my hands on the new Prodigy Ace Line plastics a few months ago and have to say that I am very impressed.

The Base Grip plastic, the inexpensive blend that will retail for $8 a disc, is not a base level plastic. While it shares the baseline price of an Innova DX, Discraft D, or even Discmania Active Line disc, the quality is much better and this plastic is more durable. Base Grip plastic is more like a mid grade plastic with a grippy feel and durability that will withstand normal course beatings. After several rounds with my tester discs, there is only moderate wear on my Base Grip fairway driver.

China often has a reputation for manufacturing low quality products. While their manufacturing practices in the past were usually focused on low cost, in many ways the Chinese manufacturing sector today is much more advanced than what we have in the United States. The Ace Line discs look very consistent and appears to be made with quality machinery. One of the biggest knocks on the US disc manufacturers is that the discs produced are very inconsistent. It seems like every run of discs have a slightly different shape and noticeably different flight.  Ace Line discs haven’t been around long enough to monitor the consistency, but I wouldn’t be surprised if these discs end up being more consistent and produce more reliable flights.

Prodigy’s Ace Line focuses on simplicity. There are four different disc types: D (distance drivers), F (fairway drivers), M (midrange) P (putters) and they plan to produce five different stabilities in each disc classification. Just by looking at the disc names, you will know exactly what the disc type and flight will be.

It appears that one of Prodigy’s main focus points with the introduction of the Ace Line discs is on the recreational player. With a more affordable price point and simple naming system, the recreational disc golf player and big box stores look to be the intended target market.  While I like the simplicity of the naming structure, it’s not very cool to tell your friends that you just aced with a M Model OS.  For that reason, I kind of wish these discs had real names.

The Ace Line will feature simple color options and two different plastic types. The Base Grip plastic is the affordable version while the DuraFlex blend is a premium version that will still be more affordable than the average premium plastic blend.

While this new disc line is manufactured in China, these discs are unique molds and not just clones of the current Prodigy Discs. 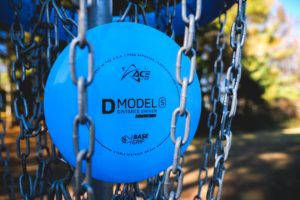 The D Model S is a wide rim stable distance driver. I was concerned that with as fast as this disc is that it was going to be too overstable for me, but it wasn’t. It was a nice moderately overstable driver that I was able to get a good amount of distance with. It is a stable disc but not too fast to be unusable for players like me. The D Model S works well for both backhand and forehand throws. 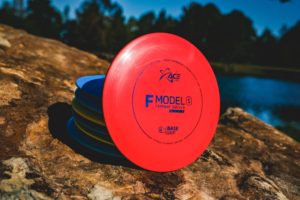 I was surprised how thick the rim was on the F Model S for a fairway driver. Prodigy gives it flight ratings 10/5/-1/3, which were pretty accurate. Personally, I prefer a fairway driver with a thinner rim, but I think Prodigy’s approach with this disc speed for is to utilize these more as distance drivers in their starter sets, which appears to be a major part of the Ace Line marketing plan. 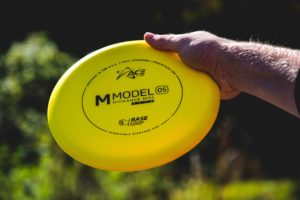 The M Model OS is a wide diameter midrange with, what is in my opinion, a great feel. It is a beadless midrange with a flat top and traditional overstable flight that is really consistent. I like the M Model OS for both forehand and backhand throws. 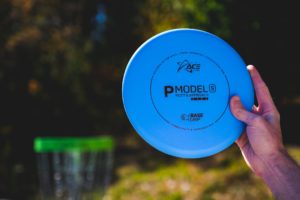 The P Model S is a shallow putter with a flat flight plate and a micro bead. It is a a little different feel than what I’m used to but after using it for a while I was really loving the consistent release and easy pop it generated while putting.  My P Model S is in Base Grip, which is a stiffer plastic and not quite as grippy as I would prefer. I’d say this discs is pretty similar to the newly released Mint Profit. When it comes to throwing, the P Model S works very well as an approach disc and has a nice stable flight with a consistent gradual fade.

Prodigy is also releasing a disc golf three pack for these discs.  This three disc set includes the F, M, and P models listed above. Being that their initial release all the discs are in the ‘S’ or ‘OS’ version, this really doesn’t make for a very good starter set, but the affordability of the 3 Pack makes it a perfect way for experienced players to try out the new Prodigy Ace Line.

Once the ‘US’ understable version of the F, M, and P are produced, Ace Line will have a killer beginner set that offers good plastic at an incredible value with discs that fly well for beginners.