Our site is designed to give honest reviews and opinions on the different disc golf courses we play, and the golf discs we use to play them. We are simply a group of disc golf players, that enjoy the game. We are not professionals, we just thought it would be fun to make a blog with reviews about the sport we are so passionate about, and give us an excuse to try different Frisbee discs and play Disc Golf Courses throughout the United States. Feel free to comment on our site, ask questions, share on Facebook, tweet with us, and interact!

Disc golf reviewer began over a decade ago as a group of friends began playing, and then writing about disc golf. Over time as we’ve played more and increased our network of friends we’ve added additional authors and contributors. This is our team of talented, and enthusiastic but  not so talented writers. 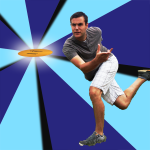 Kirk Salisbury – Kirk was one of the original founders of Disc Golf Reviewer and started our twitter account @discgolfguys.  In the disc golf world Kirk is known for his 360 forehand drive. He has a passion for data and results and loves finding answers to data that determines “what is the best disc golf disc”.

Kirk has four children (including twins) and spends most of his time driving success to his business Send Eats. 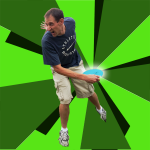 Alan Barker – Alan was the other original founders of Disc Golf Reviewer. He is primarily a family man with five children, but still finds time to play a quick round of disc golf before work almost every day. He also actively plays disc golf tournaments and has competed in major events such as the Las Vegas Challenge and the Dynamic Discs Open. His focus is on being a “good” amateur player.

Alan loves trying out new discs. Any time we find a new disc golf brand, Alan is likely to write an article about it and let you know his opinion of whether he thinks it is good or junk. 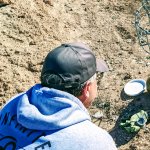 Todd Durrant – While Todd loves disc golf, he likes the creative side of things even more. He is a recreational disc golfer and doesn’t take his play too seriously. You will never hear Todd curse or get angry when he has a bad throw.  Todd has invented several disc golf products including the disc golf holster pouch.

Todd’s brain child on the Disc Golf Reviewer articles is his “Play Angry – A Zenless Guide to Disc Golf” series.  This tongue in cheek series takes light of the many stereotypes and exaggerations we see among those who love disc golf. 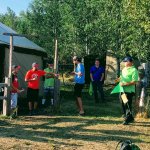 Jace Smellie – Jace is the real writer among our group and actually has college degrees to prove it. Jace recently graduated with a Masters degree from George Mason University and was a graduate teaching assistant of creative writing. He has been an avid disc golfer since 2011, and has a passion for following professional disc golf. Jace has run several major tournaments including the Portenuf Valley Open which is one of the biggest disc golf tournaments in Idaho. Jace worked for Infinite Discs from 2013-2019 and there are few people in this world who know more about disc golf discs than Jace. 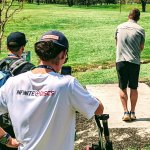 Keith Barker – Keith was introduced to disc golf by his brother in law and has reviewed hundreds of different discs and other disc golf related products. While attending college at Utah State University, Keith worked for Infinite Discs until heading out to North Carolina for law school..

He now manages the website Discount Disc Golf and is the expert source for all things cheap discs. If you’re looking for disc golf deals, articles by Keith will provide you with some excellent information. In addition to a passion for disc golf Keith is a big time biker and can be followed on Instagram

Kaden Denison – Kaden was the #1 ranked Jr. bowler living West of the Mississippi. He still loves bowling, but let’s be honest, the scenery for bowling isn’t quite as nice as the disc golf course. While bowling and disc golf are very different, the mental aspects of both sports is still very similar and he’s able to share some of the mental tips he’s learned through bowling with the disc golf community

Dawn Mischele – She is our female author, she’s been playing disc golf since she was sixteen years old. As a woman disc golfer, she understands how to play this game from a woman’s point of view. You might find her in Throw Like a Girl series on this blog.

In addition to his contributions to Disc Golf Reviewer, Jace was the primary writer for the Infinite Discs State of Disc Golf articles for many years.

While many professional disc golf players can throw 500 feet, we can’t. Not even close. We are simply average golfers, and we give our reviews from the standpoint of the beginner or intermediate player. A high speed disc doesn’t really make much difference for golfers like us; in fact, they often produce adverse results that provide less distance and accuracy than understable fairway drivers.

The ideal way to play disc golf is to have a few great discs that you know how to throw, and that will perform exactly how you want. Not everybody should have every disc made by all the major golf disc manufacturers. Our reviews will help you to choose the best discs for different courses and throwing styles. We throw backhand, forehand, sidearm, and tomahawk, and will explain what we like to do to maximize efficiency on each hole. We perform tests and use statistical analysis to figure out exactly which discs provide the best results for different types of throws including: distance drives, accuracy drives, turnover throws, skill fade shots, straight shots, and long putts.

Purchasing golf discs can be confusing, it’s hard to know where to start. There are so many different types of golf discs and they come in different plastics, weights, and models. Our reviews will also discuss the advantages and disadvantages of the different plastics each manufacturer makes, and how to select the right weight for the type of disc you are looking for.

We have focused mostly on reviewing Innova Discs, but hope to review other brands at some point in the future, including: Discraft, Millennium, Westside, Latitude-64, Skyquest, and Wham-O Frisbee Discs. Our tests and statistical analysis will help you to find the best drivers, mid range, and putters so you can save money by not having to test the discs that just aren’t for you.

Frisbee Golf is a great game that the entire family can enjoy. It’s also a good way to get exercise, stay in shape, and make friends. Disc Golf can be played at official disc golf courses, of which there are thousands of all over the country; it can also be played in the woods, on the college campus, or on any open space where one can safely throw a Frisbee. Unlike “regular” golf, disc golf courses are usually free to play. Courses can be in neatly kept parks, on useless waste land, or on the sides of rugged mountains.

We hope you get as much satisfaction out of Frisbee golf as we do, and hope that our reviews will be useful as you choose the best discs and look for good places to let the plastic fly.