Today, the Disc Golf Reviewer World Series of Putters continues its search for the best putter in the world. This is an NCAA basketball style tournament and project where every day I test two putter molds against each other on the putting green in a head-to-head competition before posting here about my experience and the results.

The first round is coming to a close. We have one of the final two first round matches in the Aviar Region today between the 7 seed Discraft Banger GT and the 10 seed Birdie Marvel. 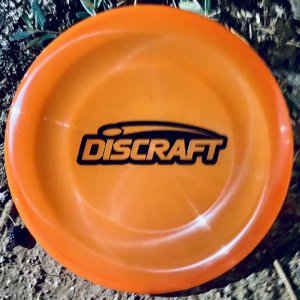 The Banger GT is a classic putter mold in the Discraft lineup. “GT” stands for “groove top,” and the Banger GT has just that. It is a traditionally shaped tall beaded putter but with a twist!

There is a groove that runs all around the disc’s flight plate. This makes the Banger GT similarish to the thumbtrack putters we’ve tested in previous matches, except its groove top has a pretty large semicircle shaped dip that drops into itself from the top of the disc rather than a small lip near the top of the rim.

For today’s match I used the Z Glo plastic blend Banger GT. The Z Glo Banger GT comes in a variety of bright colors that glow in the dark. It is a stiff, durable plastic blend that would not traditionally be considered a putter plastic. 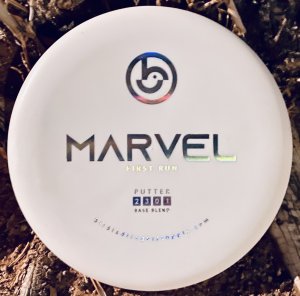 Birdie Disc Golf Supply Co is one of several new disc golf companies to begin making their own discs this year, and the Marvel is their only putter available so far.

The Marvel is a moderately tall straight flying putter. It has a pretty flat top and a beadless rim that feels quite comfortable in the hand. I think it is comparable to the Dynamic Discs Warden, but it has a less rounded bottom of the rim as it slants straight in toward the bottom of the disc.

For our test, we used the Base Blend Marvel. Birdie’s Base Blend plastic feels a lot like Gateway’s putter plastics to me. It has a nice grip with a bit of flexibility, but what makes me compare it to Gateway the most is its slight chalkiness in how it feels. It is a very nice putter plastic blend.

Even though they feel pretty different in your hand, the Banger GT and the Marvel are pretty similar in their specs, and they should fly similarly as well. The Banger GT has about .2cm more rim depth than the Marvel, which does make the Banger GT feel a bit taller in the hand even though they are technically the same height.
We have another battle today between a beaded putter and a nonbeaded putter. The Banger GT’s bead is pretty big, and generally beaded putters perform a bit more overstable than beadless putters. On the putting green today, I can’t say I noticed a huge difference in stability during the match.
Perhaps I didn’t notice it because I was too busy navigating the Banger’s groove top. It takes some getting used to, but I think I like the groove top better than the slower, blunter shaped thumbtrack putters. I think I’d prefer the groove top for approach or driving putter shots rather than the putting green, primarily because of needing to navigate the bottom of the groove on with my fingers while giving it a putting fan grip. It took some time to try and find a consistent grip and release, but also I think it was just different from what I was used to rather than a bad thing.
The other big difference at play in this match is we have a premium plastic blend going up against a base putter plastic blend. I liked the feel of the Z Glo Banger GT, but I think I’d prefer that plastic blend again for driving or approach shots. For grip in the hand and gripping the chains, I prefer the grip and tackiness of base plastic blends. 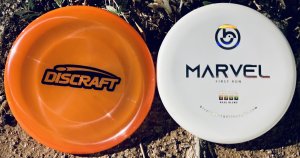 For more info on the format and scoring system I used to test these putters against each other, be sure to check out our main World Series of Putters post.
I conducted today’s match on a cool evening at a local disc golf course on a permanent Innova Discatcher basket under a streetlight. After warming up with both discs, a coin flip determined that the Banger GT would go first on the first set of putts. Here is how it all played out:

Though it put up one of the worst performances so far from 20ft, it made up for it by putting up one of the best performances from 40ft. The 10 seed Birdie Marvel is moving on to the second round after knocking out the 7 seed Discraft Banger GT with a score of 58 to 42. 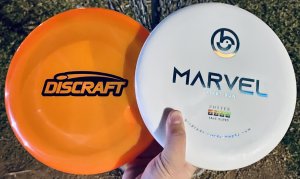 I spent a good portion of the Big Z Roach’s match emphasizing the importance of using a base plastic instead of a premium plastic. While I don’t think it hurt the Banger GT in today’s match as much as it hurt the Roach, I do think the Banger GT would have benefited if I’d used a more base level plastic blend for it.
The Z Glo grip was decent in my hand, though I thought the bottom of the rim had some plastic flashing that was pretty uncomfortable to navigate. And the disc did have one bad spit out and a couple misses that weren’t dead center but still left me wondering if the Base Blend Marvel would have stayed in the chains on the same line.
More than the plastic blend, I think the unfamiliarity with the groove top is what probably hurt the Banger GT the most. But unlike some of the other unique putter designs I’ve tested so far, I didn’t leave the match feeling opposed to the unique elements of this disc. Because the rest of the disc is shaped like a traditional putter, once it got in the air, it flew very straight and just like a normal putter. So I think if someone wanted to take the time to find a confident grip that consistently works on the putting green with the Banger GT, I’d be keener to say go for it with this particular “unique” putter mold.
The Marvel was a solid putter throughout the match as well. How about that killer performance from 40ft?! I’m not sure what the problem was at 20ft though, I think I may have just gotten in my own head a little bit there. But I think I more than made up for it on the longer distance putts. Why did it do so well from 40 ft? Like I said before, I really liked the plastic blend, and the shape of the disc felt very comfortable in my hand. It had a predictable slight fade at the end that I could trust, and by the end of it, I was having a lot of fun with the Birdie Marvel.

If you want to have a more unique or different putter than your friends, I think the Banger GT would be one of my top recommendations, but I’d also recommend you choose one in a more base plastic like the beautiful Jawbreaker Banger GT.
But if I’m just choosing between these two disc molds, I’d definitely recommend going with the Birdie Marvel. It is a new disc and a new name in disc golf, but I wouldn’t be surprised if everyone is talking about this disc and this brand before long.
Come back tomorrow for our final match in the first round. We will be finishing up the action in the Aviar region with a match between the 2 seed Kastaplast Berg and the 15 seed Latitude 64 Faith.
5/5 - (4 votes) 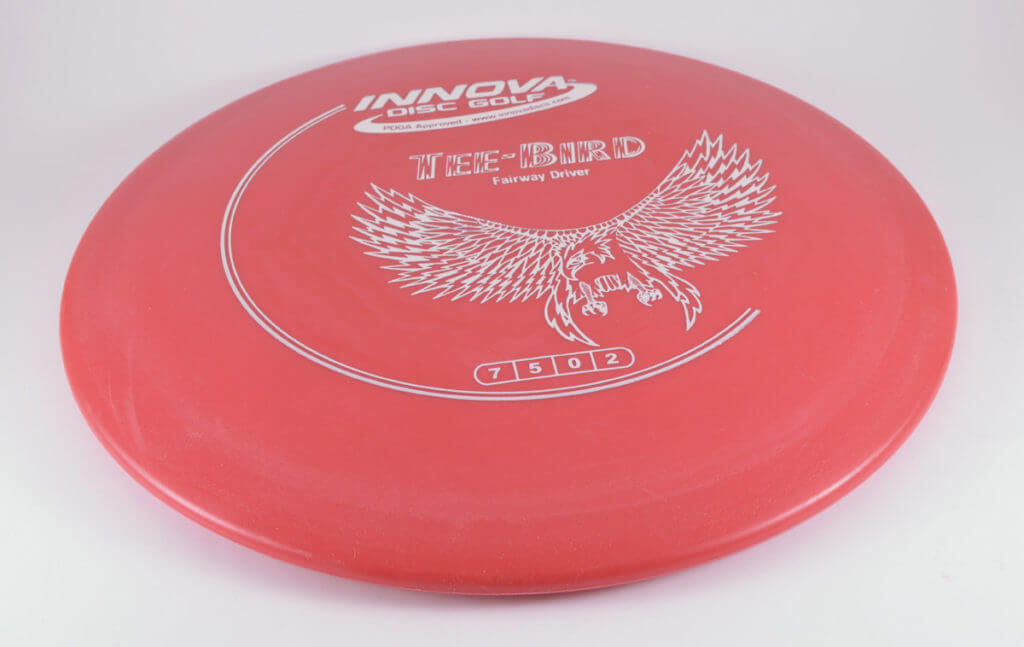 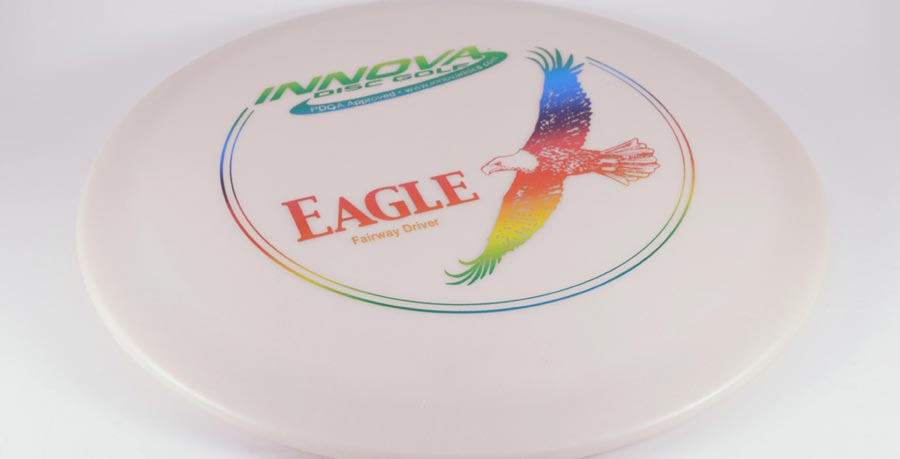