Today we finish up the second round of the Disc Golf Reviewer World Series of Putters! In this series, we are searching for the best putter in the world and hoping to provide the disc golf community with a plethora of information along the way to help everyone decide what putter is right for them. This is an NCAA basketball style tournament and project where every day I test two putter molds against each other on the putting green in a head-to-head competition before posting here about my experience and the results.

In today’s match we are back in the Aviar region where the 10 seed Birdie Marvel is taking on the 15 seed Latitude 64 Faith. The Birdie Marvel got the victory in its first round matchup against the 7 seed Discraft Banger GT with a final score of 58 to 42. The Latitude 64 Faith pulled off an upset over the 2 seed Kastaplast Berg by a score of 56 to 32 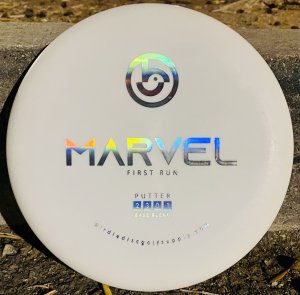 A surprise for me was how much the Birdie Marvel felt like and reminded me of a Gateway putter. The Marvel in Base Blend plastic has a really nice grip with a slight chalky feel that is very similar to the texture and grip found in many of the Gateway putter plastic blends.

The Marvel also has a pretty distinct shape on the bottom of the rim where it breaks from the rounded edge to cut in a straight line down to the bottom of the rim. I wondered how this might impact the feel and grip on the disc, but so far that shape really isn’t a noticeable feature for me when I’m putting with the Marvel. 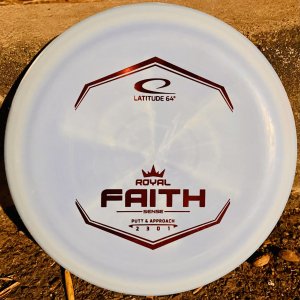 I am not really sure what I expected when I first held the Latitude 64 Faith, so I’m not sure how surprised I was by anything about it! And maybe that is a good thing–The Faith feels and flies like a standard tall beadless putter. The shape and feel reminded me a bit of the Discmania P2.

This wasn’t a surprise since I’d already been introduced to it with the Latitude 64 Hope, but I really like the feel of the Royal Sense plastic that the Faith comes in. The Royal line of discs from Latitude 64 is all about molds of discs that feel really smooth and seamless to provide a consistent grip and release, and so far I’ve really enjoyed my experience with this line of discs.

As you can see above, these two discs are very similar to each other. How they fly and feel are very similar, which is why this was one of the round 2 matches I was most looking forward to.
The Faith comes in at 1.9cm tall. which surprised me a bit since I thought the Faith felt like the taller of the two discs. If you look at the profile picture, you can see the slight differences in their rim shapes. The Marvel has more of a blunt edge that drops a bit lower before cutting in to the bottom of the rim (that lower breaking point is also part of why the shape isn’t as noticeable to me when I grip it since that feature in its shape isn’t interacting with my fingers much during the grip). The Faith however has a sharper edge that cuts at a higher point, which could be part of why that disc feels taller to me. 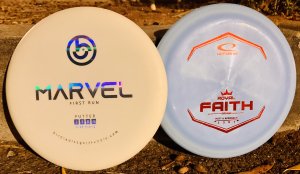 For more info on the format and scoring system I used to test these putters against each other, be sure to check out our main World Series of Putters post.
I conducted this match on a slightly chilly evening under a conveniently placed streetlight at my local disc golf course on a permanent Innova Discatcher basket. After warming up, I flipped a coin to see which putter would be thrown first for the first round of putts, and it was the Birdie Marvel. Here is how it all played out:

As I expected, this one was close and came down to the wire. Despite a cold start from 30ft, the 10 seed Birdie Marvel came back to get just enough to pull out the win over the 15 seed Latitude 64 Faith. Final score: 53 to 49. 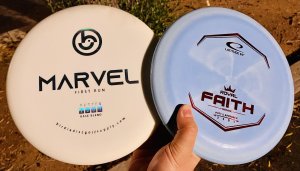 Like I just said above, I had a feeling this one was going to be close. I like both of these putters quite a bit so far, and I think either one could have pulled out the win today. As is often the case in these matches, the advantage on the 40ft putts dictated the winner today. Overall in the second round of the Aviar region, I’ve been pretty disappointed with my performances from 40ft. Again, this is why I putt with the two discs in a match at the same time in order to keep the individual matches as fair as possible, but I also feel that the better I putt, the more I can trust the final outcome. But at the same time, I’m only one guy with limited time and resources, and I think the Marvel coming out on top in this round feels fair to me. Somebody had to lose, and today it was the Faith.
If I had to pick out an advantage the Marvel had today, I’d probably have to go with the plastic blend. I think the Royal Sense Faith feels fantastic as well, but I think the chalkier feel of Birdie’s Base Marvel gave me a touch more confidence out there. I also think that chalkiness is preferable in colder weather where discs can stiff up and get a little slick.
Whatever the reason, the Marvel is the winner today, and it is filling the final available slot in the round of 16!

Again, both of these discs are a really high quality option. If I had to choose between the two, it would be tough, but I’d probably end up going with the chalkier feeling plastic available on the Birdie Marvel.
Check back tomorrow for a quick second round recap and preview of the round of 16. Then the action continues the next day as we move back to the Alpaca region where the 8 seed Clash Popcorn will be taking on the 12 seed Divergent Narwhal. Thanks for reading and good luck out there on the putting greens!
5/5 - (2 votes)

We’re back with another match in the Round of 16 in the Disc Golf Reviewer World Series of Putters! In this series, we are searching…

The second round of the Disc Golf Reviewer World Series of Putters continues today! We are searching for the best putter in the world and…

It’s time to check in with one of our favorite, down-to-earth, disc golf YouTubers, TUCK4S1.  He recently got a some easy-to-throw MVP discs from Infinite Discs and put together…