It’s contract season for professional disc golfers, and today we saw the biggest sponsorship change since Discraft signed Paul McBeth in 2019. Coming off the best season of his professional career, Simon Lizotte just announced that he will be switching from long time sponsor Discmania to MVP Disc Sports on a 10-year contract.

This is a huge development in the world of professional sponsorship as Simon Lizotte is not only one of the top 10 players in the world, but he is arguably the most popular disc golfer on tour. He has a huge social media following and is well known for his Youtube videos and trick shots.

So what MVP discs will Simon be throwing with his new 10 year contract?

Fortunately, we don’t have to wait long to know some of the GYRO technology overmold discs that Simon will be throwing. In his announcement video, he already revealed the discs that he’s liking from MVP. With his new sponsorship he is allowed to throw MVP, Axiom, and Streamline Discs.

The exact molds will likely change as the season goes on, but here is what Simon is throwing right now in his new MVP/Axiom Bag:

Let’s take a closer look at each of those discs. We’ll start with the putters:

Simon helped to make the Discmania P2 one of the best selling and most popular discs of all time. What discs will he hope to do the same for in the MVP lineup?

Simon says he hopes this understable putter will replace his P1 for upshots. It might be too understable for him for putting, but for the rest of us, it is a popular choice for a putting putter as well as an approach disc.

The Glitch is the newest addition to the MVP Lineup, and Simon Lizotte says it is one of the main reasons he is excited about his new bag right now (coincidence? I’m not so sure…).

The Glitch is a super floaty approach disc that is kind of like a hybrid between an ultimate disc and a disc golf putter. If you are a fan of Simon’s trick shot videos, then you should be equally excited about Simon keeping this disc in his bag. I’m not sure how much work on the course it will get during tournament time, but it is going to be a fun one for the ‘gram.

Simon just wouldn’t be a team MVP disc golfer if he didn’t keep an Envy in his bag. He actually compares it to the Sky God runs of the Discmania P2 because of its overstability. Though it is primarily known as an approach disc, the Envy actually just finished as the runner up in our recent Disc Golf Reviewer World Series of Putters competition, so maybe there’s a decent chance the Envy becomes Simon’s putting putter?

So far, Simon likes this disc more than the Envy, which is a controversial statement if you know how much the GYRO heads love their Envy. But at least for approach shots, Simon is finding the more understable flight of the Proxy to be more workable than the Envy. Again, he’s new, and he may change his mind (so Envy lovers please, give him a chance).

Simon has usually loved his midrange discs, and he seems to feel the same way about his new MVP ones as well. Heck, he even started the video by throwing an ace with a Matrix. This is going to be fun, isn’t it? 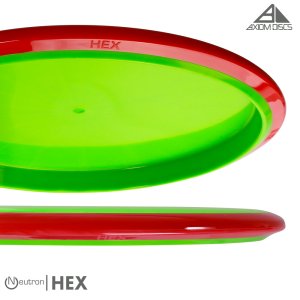 Simon says the Hex should be in every disc golfer’s bag and he compares it to “the perfect” MD1. That’s a pretty solid endorsement that I feel like I should just let stand on its own. Try one yourself and see if he’s wrong, I guess. Oh, and it also sounds like the Hex is going to be Simon’s first signature released disc.

The Matrix has been Simon’s choice over the popular Reflector for a straight to overstable midrange so far. The Matrix was a big seller when it released a few years ago, but it has become mostly forgotten since the Reflector’s release. Maybe Simon’s endorsement will help bring the taller Matrix back into style again?

The Pyro is a touch more overstable than the Matrix, and when you throw as far and hard as Simon Lizotte, you can’t have too much overstability (as you can see with the next disc on the list). Simon didn’t make the comparison, but I personally think the Pyro will be his choice to replace his trusty MD4.

Simon compared this disc to the MD5. It was more overstable than he expected, and he really liked it right away.

And they just keep getting more overstable. The board flat “mutant” as Simon calls it Deflector will likely get a lot of use from Simon. Again, Simon is always going to favor the most overstable discs, and the Deflector is arguably the most overstable midrange available to him in his new sponsorship team, so its no surprise he picked this one out.

Simon hasn’t traditionally been known to throw a lot of fairway drivers, as he often just bombs with his midranges and then jumps up to the high speed distance drivers when they are needed. But in today’s video, Simon listed several fairway drivers that he is bagging, so perhaps the new GYRO technology overmold fairways might be a catalyst for a change in philosophy for Lizotte?

Simon called this the FD Crave. It sounds like he has found it to be very workable and feels committed to keeping it in his bag so far. The Crave has been a top seller in the MVP/Axiom line for a long time, and I wouldn’t be shocked to see some specialty runs with Simon’s name on this disc released within the next couple months.

Simon says this disc is dead straight and a big brother to the Crave. The Servo is less popular than the Crave right now, but maybe Simon chooses to put his name on this disc for a special release and the sales numbers flip overnight.

Simon calls this one of MVP’s best molds and a slightly slower PD. He says it is a perfect stability for his arm speed which was a bit surprising for me to hear since this guy chucks really overstable drivers. But GYRO overmolds are a bit different, and the Volt has been a popular mold for a long time, so it’s no surprise to see Simon fall in love with it right away. 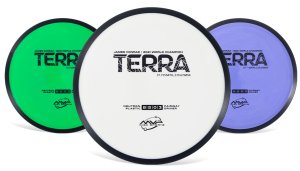 This is one of the newer discs in the MVP lineup and a James Conrad signature disc. Simon compares it to his Doombird II (an earlier FD3 run). He says at this point, he is going to use the Terra to replace the Volt in windier conditions.

Simon says he was surprised this disc wasn’t a meathook, but Simon is also not most disc golfers, and I think most disc golfers would call the Fireball a meathook. This flat super overstable disc mold I think has a chance to overtime take the Terra’s spot in Simon’s bag as he gets some beat in and flying straighter, but I’m just guessing at this point.

This is Simon’s PD replacement at this point. He calls it a faster Servo, which I think most GYRO throwers would agree with that claim.

Simon says that MVP’s distance drivers are the most different disc type in the MVP Line, and anyone who has thrown any of the GYRO technology overmold drivers would likely agree. I’m sure it will take a little bit of time for a big arm player like Simon to pinpoint which molds will be his go to options off the tee, but here is what he’s liking so far:

The Octane mold has a wider 13 speed rim which Simon admits will be a bit of an adjustment at first. He is concerned about them being too understable for his armspeed, but was impressed by just how far they go. MVP/Axiom have a large selection of distance drivers, so I wouldn’t be surprised to see Simon change molds as the year goes on, but one thing that won’t change–the distance. GYRO overmold distance drivers can be tricky to figure out, but when you do figure them out, they can fly just as far or further than anything esle that’s out there. So watch out.

Similar to the Octane, this disc bombs, but it is a bit more understable. Simon anticipates using this for forehands or rollers, but it also sounds like he is definitely still figuring his GYRO life out in the distance driver department.

Simon has named this disc his PD2 replacement driver, and if you’ve watched Simon play, you’d probably expect this disc to get a lot of action. The Panic is a very overstable high speed driver. For most disc golfers, this disc is going to want to fade as soon as it comes out of your hand, but for big arms like Simon, it should be able to handle a lot of torque and hold up well in windy conditions. I expect this disc to be one that Simon is going to be throwing for years and years to come.

And there you have it! New discs for a new stage in Simon’s career. Will this be the year Simon follows in the footsteps of his new teammate James Conrad to ride the momentum of a new sponsorship all the way to a world championship? We can’t wait to find out! 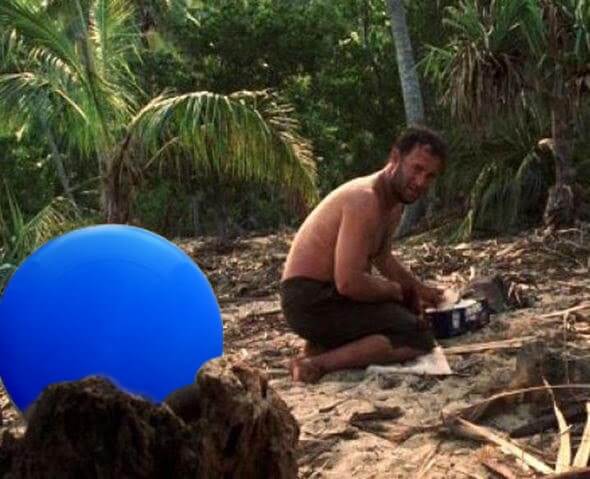 OK, we’ve all played this little game before. What if you were stuck on a desert island and you could only have “x” number of…