For the die hard disc golfer, Thought Space Athletics or TSA for short is a somewhat familiar name (not to be confused with airport security) in the disc golf world. According to their website, “Thought Space Athletics is a company focused on elevating the mind and body through sport and design. We connect creativity, quality and concept to elevate your mind and game on and off the course.”

Their real focus is on creative disc golf artwork and TSA has, up until now, focused on T-Shirt designs and custom stamps for disc golf tournaments and large online retailers like Disc Golf United and Infinite Discs. TSA has designed stamps for the USDGC, World Disc Golf Championship, MVP Open, as well as for touring professional disc golfers like Garrett Gurthie and Nate Perkins.

In addition to retail sales of their custom stamp discs made by major manufacturers, TSA now has their own line of discs (well we assume there will be more discs in the future, for now it is just one disc, the Mantra driver). For their initial release, TSA included their disc in the Infinite Discs VIP Club, which is a “disc of the month” service where subscribers get a surprise collectible disc each month. Being that this is the first ever disc made by a new brand, it will be interesting to see how collectible the Mantra will become. 800 of these first run discs were distributed through the Infinite VIP Club and the remaining 200 are scheduled to be released for sale on the ThoughtSpaceAthletics.com on October 25th. Additional runs of TSA discs will be sold on InfiniteDiscs.com and will likely be made available to other disc golf retailers as well.

As part of an Non Disclosure Agreement with the manufacturer, TSA is not allowed to reveal who manufacturers their discs, but they have told us that these discs are made in the USA. Self proclaimed experts on disc golf forums are concluding that Thought Space discs are manufactured by the same company that makes Mint Discs, which many speculate to be MVP disc sports in Michigan or Innova Champion Discs in California. 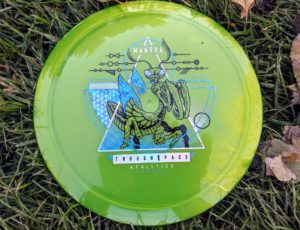 The plastic used for the Ethereal Mantra just might be the best plastic blend in disc golf. I was immediately impressed by the look and feel of Ethereal plastic.  The plastic is shiny and has a beautiful glimmer to it. It was hard to take a picture of my disc without getting my own reflection in it. Even though I was playing with a green disc on a course with mostly green grass, the sparkling of this plastic and stamp made it easy to spot. Not only does this plastic look great, but it has an amazing feel to it as well. It is really grippy with moderate flexibility and a nice stiffness. The plastic is kind of like a cross between Innova GStar and Latitude 64 Goldline.

I have only used my Mantra for one disc golf round thus far, but the plastic appears to be very durable. I nailed a tree about 70 feet away on a full power drive and there is no noticeable damage. One interesting thing to note about the Mantra is that their are dark marks along the outside edge of the rim about every inch and a half. These marks are universally spread throughout the disc, and my guess is that it has something to do with the injection molding process. Unlike MVP Discs, these darker marks are perfectly rounded and are only visually observable and you cannot feel them.

Thought Space’s focus has always been on amazing disc art work, so the stamp designs are sure to be amazing stamps for their own disc brand. The VIP edition disc utilizes a triple foil stamp with a praying mantis surround by geometric designs. The multi color foils really help this stamp to stick out. With TSA’s focus, it is likely that triple foil artwork will be the norm for their stamp releases and not the exception for this VIP release.

The Mantra is a moderate speed driver. I would give it a speed rating of 10 as it is comparable to the Innova Beast. The rim of the Mantra is thicker than a traditional fairway driver but not so thick that it would be classified as a distance driver by most companies.

Flight wise, the Mantra is relatively understable. The speed and understability of this disc provide the perfect combination to provide maximum distance for recreational players, old guys, and intermediate players who throw less than 350 feet.  For me, when I throw the disc at full power with a level back hand throw it will turn off to the right, provide that extra S-curve distance, and then fade back at the end of the flight giving me about 350 feet of distance. The disc glides well and doesn’t turn into a roller for me on backhand throws.

When thrown forehand, I have to be careful with the Mantra to make sure that I release it with a smooth control flick rather than a full power heave, otherwise it will flip too much and turn to the ground. With smooth 70% power forehand throws the Mantra flew beautifully with a straight flight and a consistent fading finish. Using Innova flight ratings, I would give my brand new 175g Ethereal Mantra these ratings: 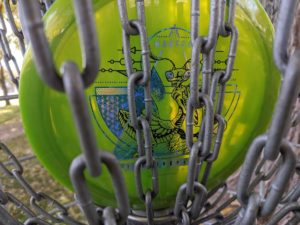 Overall, the Mantra is an excellent disc and I think TSA hit a home run with their initial release. This is the perfect speed/stability to provide max distance for players that don’t have a ton of arm speed. The Mantra likely won’t get perfect reviews because this disc is not for power throwers (although it might work well for rollers, I don’t have enough roller skills to really test this out). For the 90% of people who play disc golf that can’t throw a disc 400+ feet, you’ll want to try the Mantra. With the combination of superior plastic and attractive disc stamps, I think the Mantra disc and the TSA brand have a lot of  potential. I won’t be surprised if the first run versions become extremely valuable in years to come.