Obsidian Discs is another European Disc Golf brand whose discs recently hit the shelves in the United States.  Obsidian discs are manufactured in Finland. The company has been around since 2014, but it took pandemic shortages to provide the demand to import these discs to the US.

Obsidian currently have seven different disc molds listed on their website, and nine that have been approved by the PDGA. I have tested out the six discs that are currently in stock at Infinite Discs. After testing and playing with only Obsidian discs for a few rounds, I am impressed. They don’t have a complete selection of disc types to meet a serious players needs, but the discs that they do have are good ones.

The first notable feature of Obsidian Discs is the quality plastic. Their premium plastic is called K9, and it has two different visual effects. Most companies would call these two separate plastic types. The main platic has an opaque look like a Star or ESP plastic. The second effect is like s Champion Metal Flake with sparkles. While the look of the main plastic is like Innova Star,  the plastic blend is more grippy. This is one of the best feeling plastics I’ve ever felt. It’s not too grippy like Kastaplast plastic, but it has a really nice amount to give me maximum spin.

Obsidian currently has four different drivers, and as a moderate arm speed amateur player, I like all of them. 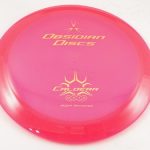 The Caldera is the most overstable of the drivers with flight ratings of 12/5/-1/2. I thought this disc was even less stable than the numbers indicate and was able to get some good distance in the 350 feet range with the Caldera. This disc was too understable for me to throw forehand at full power, but worked well enough for controlled flicks. Players with a lot of power will likely not be able to get max distance with any discs currently in the Obsidian line. 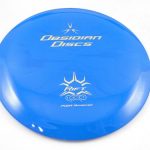 The Obsidian Rift (not to be confused with the DGA Rift) is an understable driver that is excellent for hyzer flip distance. With a nice smooth release this discs provides a nice S-Curve and excellent distance. With a flat release or too much power, the Rift turns and burns pretty easily. Players with around 300 feet of max distance will really like the Rift. 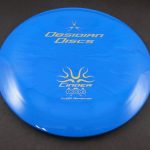 The Cinder is a stable flying go to control driver. It’s flight ratings of 7/5/0/2 are pretty accurate, but I feel the Cinder does have a little bit of turn. As this disc gets beat in it will likely have a little straighter more understable flight to it. The Cinder works very well for me for smooth control shots both backhand and forehand. 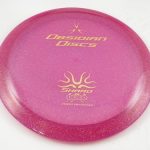 The Shard might be my favorite of all the Obsidian discs. For me, this fairway driver is almost perfectly straight with excellent glide. This disc works as well for long tight tunnels as anything on the market. It has a flight similar to a Latitude 64 River or a Discmania FD. 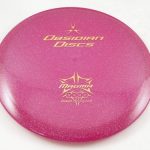 Obsidian currently only has one Midrange available in the US, the Magma. I can’t exactly provide a detailed review on the Magma because I lost it after just a few throws. The Magma has flight ratings of 5/5/0/2, and for some reason I was thinking it was more of a straight understable flight. I released it at a slight hyzer angle and between its stability and a right to left wind, it rapidly drifted over the park fence and into a marsh of doom. 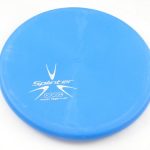 The Splinter putter is a unique disc mold. This is the only Obsidian disc I’ve tried in their G7 plastic. G7 plastic is more of a base blend, and is even more grippy than G9. The Splinter was actually Obsidians first disc and was PDGA approved back in 2014. The Splinter is has a thick bulky feel, a flat top, and is really, really overstable. It has about as close to no glide as a golf disc can get. It’s very unlikely you’ll ever find anyone who uses the Splinter as a putting putter, other than in a strong windstorm. I suppose if you like glideless putters that aren’t going to turn over, you might like putting with the Splinter.

Like most European imports, Obsidian Discs are more expensive than most of the US brands. You’re looking at $19 for the premium plastic and $17 for the putter blend. While other companies also make great disc golf discs, if you are an intermediate level player with moderate arm speed and like having something different, try Obsidian Discs today.

Let’s take a look at some of the discs from Vibram that are easy-to-throw and would work for novice players. These are discs that are…