I’ve actually played disc golf with Eric Xi, who runs Yikun. While he is very familiar with disc sports, and was an avid Ultimate Frisbee player, China has only one permanent disc golf course. Chinese citizens don’t get to play disc golf very often. Eric doesn’t throw very far, and the same is likely true for most who work for Yikun. When you don’t throw very hard, all discs seem more overstable. A less powerful player always underestimates the turn rating compared with a professional.

From past experience, we also know that Yikun doesn’t have a problem letting other brands use their non branded disc molds. For example, the Yikun View is the same disc mold that is also used for the Kestrel Driver and the Sune Sport Night Trooper.

It appears that Discmania decided to simply use these Yikun molds and rebrand them as their own. To confirm my theory, here are the discs side by side. Rather than review each disc individually, I’ll just do one review per mold as three of these new discs are the same.

The three new Discmania Discs are in the Active Line, which is manufactured by Yikun. The names, flight ratings, dimensions, and PDGA approval date are listed below.

Yikun had five new discs that were PDGA approved last year and released to the US market back in March. I enjoyed these new discs and really like the plastic blends they are available in. The five new Yikun Discs are as follows: 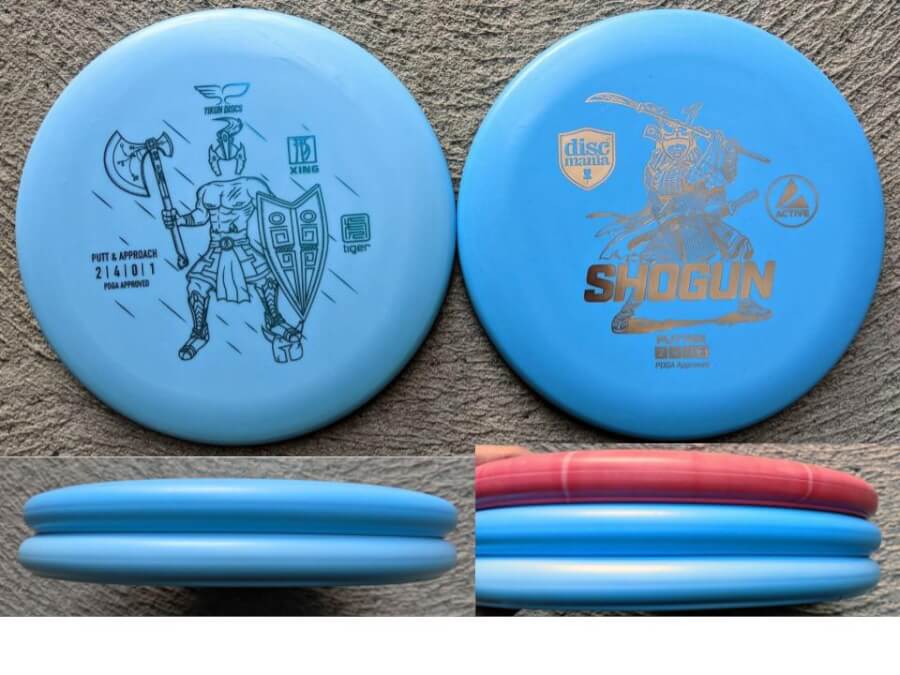 I really like this putter. When I initially felt the Yikun Shogun, it reminded me of the deep dish Latitude 64 Dagger. According to the PDGA, the Xing is actually taller and has a deeper rim than does the Shogun. I’m guessing that when they did the measurements for the Shogun they used a different plastic which yielded different ratings because these two discs are exactly the same. From the two different discs I have, if anything, the Shogun is slightly taller than the Dagger.

The picture below shows the identical nature of the Xing and Shogun. The final photo shows the profile comparison with the Dagger (red disc). It is hard to tell from the picture, but the curvature of the Dagger on the upper flight plate is slightly different. The general feel of the new Yikun putter is very similar. 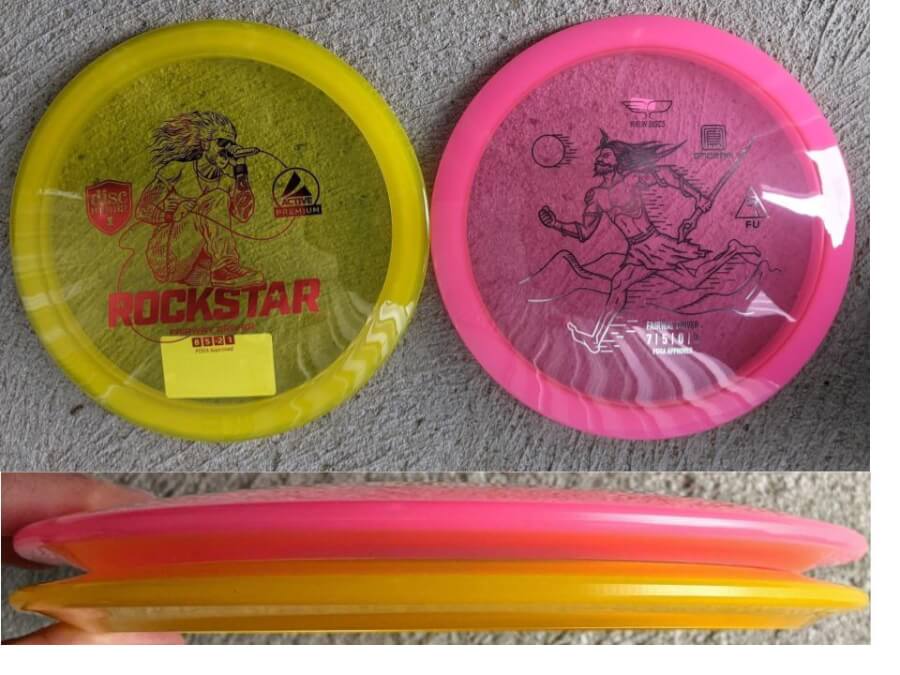 The Fu/Rockstar is a good fairway driver. Not sure if they understood what the name FU could be seen as in China, but Rockstar is clearly the better name.

This is a very domey fairway driver with a speed I’d classify as an 8-9. When it comes to the stability ratings, I’d say that Yikun is more accurate with this one than is Discmania. Yikun gives the FU a 0 turn rating with a fade of 2. Discmania says it has a -2 turn rating. I couldn’t get either of these identical discs to turn at all with my power. 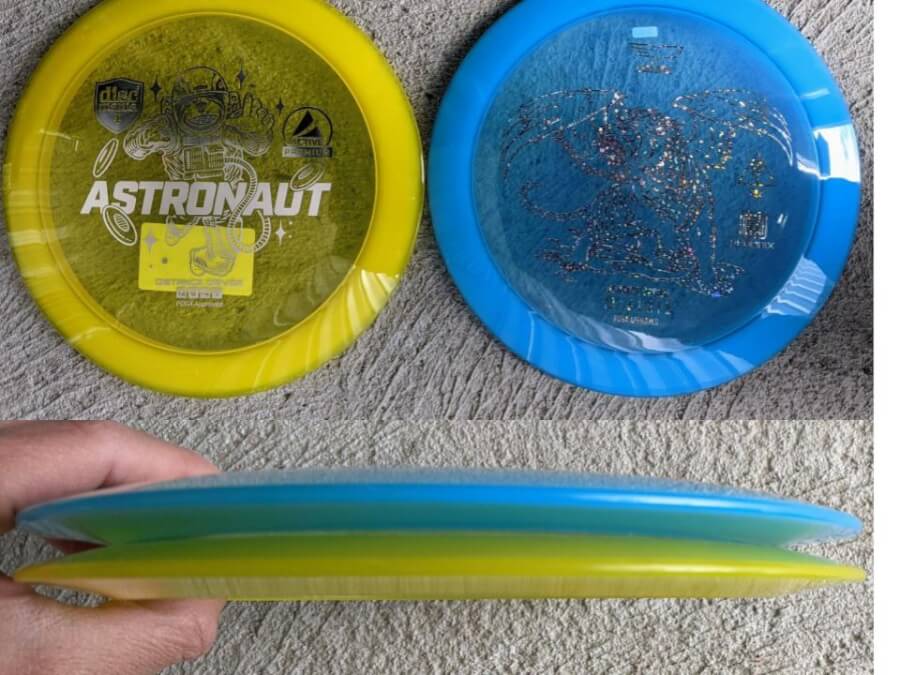 The Qi/AStronaut is a flat out distance bomber for average players like me. After a few throws with the Yikun Qi, I quickly realized that I needed to release it on a hyzer angle to keep it from flipping over. But when thrown with a hyzer release I’m able to get a full S-Curve and 350+ feet of distance with these discs. This is close to my maximum distance with any disc golf disc.

While I am still fairly certain that these two discs use the same mold, the Astronaut I have has a little bit more dome to it. If you prefer dome, you’ll want the Astronaut. If a flatter top is your preference, go with the QI (at least for the first run of these new discs, the dominess might be completely reversed with the next runs). 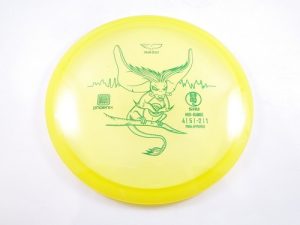 The other two new Yikun molds are both midrange discs. These are quite understable, but fun to throw in my opinion. Apparently Discmania elected not to add mids like this to their line.

The Shu is a really unique discs. It’s listed as a midrange but has a sharper wing, like a fairway driver with a thin rim. I’m not sure how much I like this disc as it has more high speed stability but less low speed stability than I like for a midrange or approach shot. The unique flight characteristics make it a little more fickle and less consistent than most mids in the same speed category. 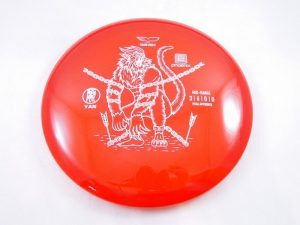 The Yan is a super straight glidey mid. It’s like the single mold version of the Tomahawk and flies a lot like an Innova Foxbat, Wombat, or understable Discraft Comet. This is a disc that I can throw perfectly straight without the slightest fade or variance. The key to get this perfectly straight flight is to throw it with touch and without too much torque or speed. The Yan is really fun to throw and is perfect for one disc only rounds for new players with an ultimate frisbee background.

All in all, the new Yikun and Discmania discs are solid. If you like supporting a European brand, and don’t mind paying a few more bucks for your discs, then buy the Discmania version.  If you are just looking for the best value and want the lowest price, then buy the Yikun version.

Whatever you do, have fun, get outside and play more disc golf. 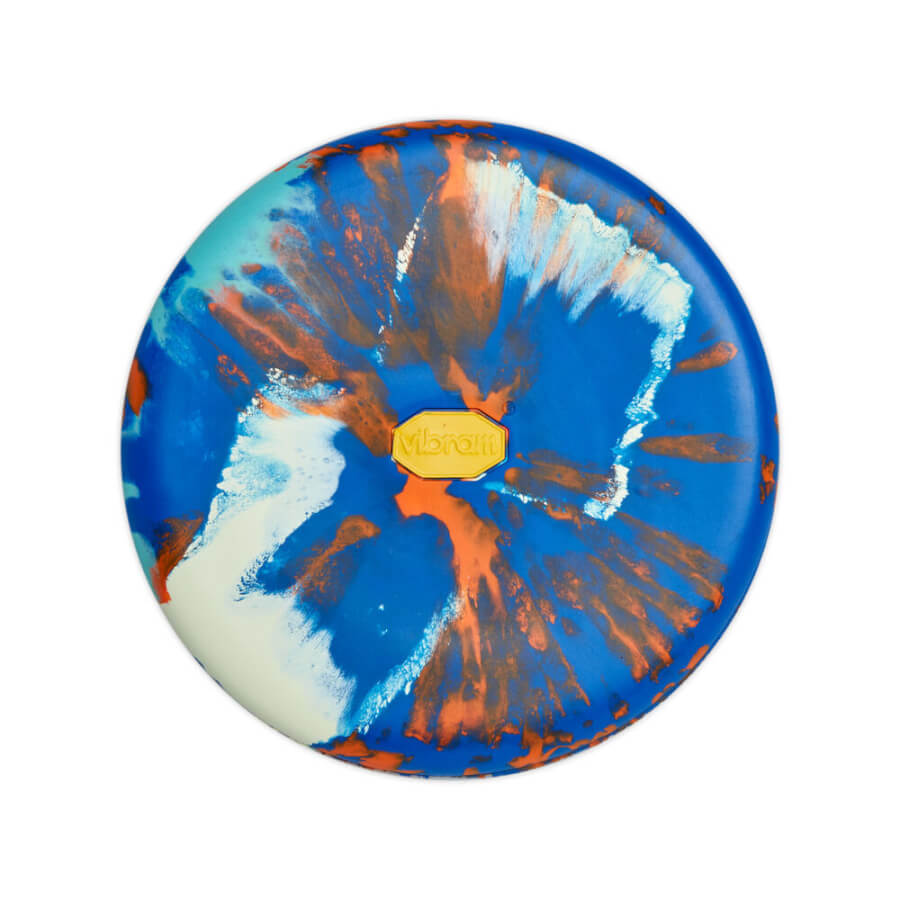 I got really excited when I got this email newsletter from Vibram. Back by popular demand Our performance-driven discs are back in stock! Vibram discs… 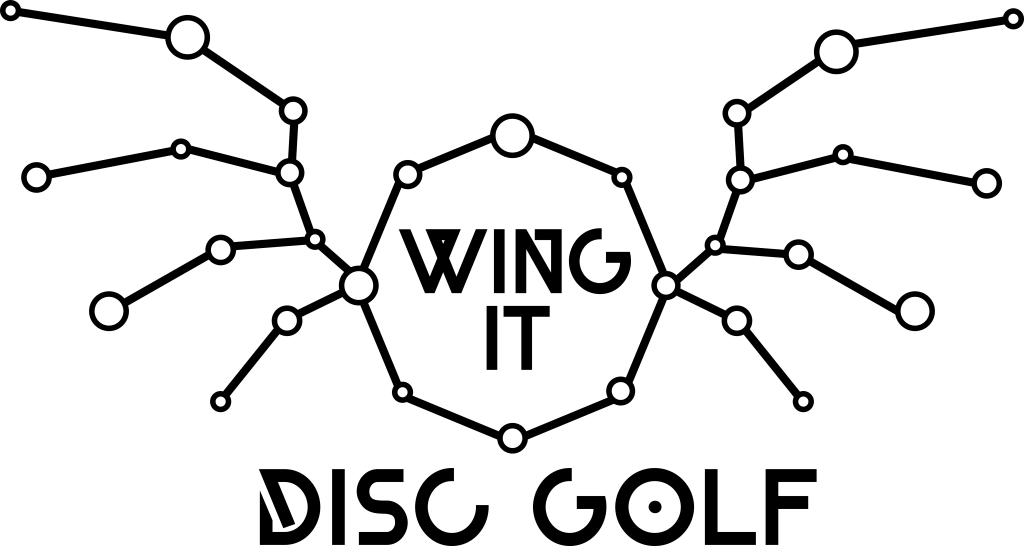 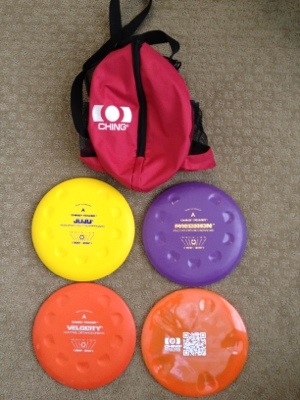