It just so happened that I got stranded for more than a week in an area that is pretty great for disc golf. There are tons of amazing courses in the Wilmington DE area. The only problem is that I only brought two discs with me. To help maximize my satisfaction from the many excellent nearby courses, and not knowing how long I will be in the state,  I decided to pick up a few discs where I could actually get them in time to use them before I am allowed to leave Delaware. The first new discs I received are Halex brand golf discs available at Walmart.

Ping Pong is my fourth most proficient sport, and I have purchased many Halex table tennis balls over the years. I had never even heard of Halex in the disc golf world before and figured this was the perfect excuse to try them out.

Without doubt, this is the worst disc golf set I had ever tried. These discs are even more un-throwable than the atrocious Aerobie sharpshooter set.

On the positives, the packaging looks very nice and informs us that these discs are “ideal for use with disc golf target or game use or practice”. 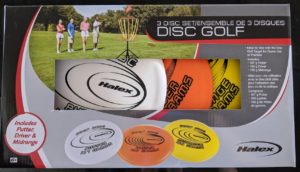 I should have taken that as a hint that Halex golf discs are made by a Chinese company who doesn’t know a thing about disc flight or disc golf. Apparently they are distributed by a company out of Ohio that doesn’t bother testing products before distributing them. 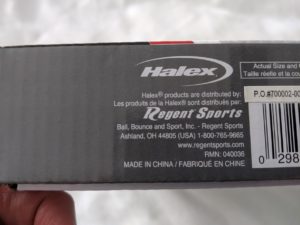 I opened the package to examine the discs and found that they are all of the same low grade base plastic. The plastic felt a little bit slick, but not overall horrible. I’ve felt worse. I actually kind of liked the stiffness of the putter, almost McPro like. The disc stamps are plain, printed on rather than a hot stamp foil, and about as basic as it gets telling you not only the disc names; driver, putter and midrange, but also their weights. That’s something I’d never seen before — the disc weight printed on front of the disc, brilliant! If anyone buying a basic set like this even understands the difference between disc weights and what that even means.

I then examined the shapes of the disc and observed that the “midrange” and the “driver” are exactly the same.

I couldn’t discern any difference between them with the naked eye. Was this a mistake, did I happen to get a set with two drivers and no midranges? It’s possible, but I’m guessing that they all come this way. The difference between the midrange and the driver is that the midrange is yellow and has “midrange” printed on it, and the driver is Orange and has driver printed on it. 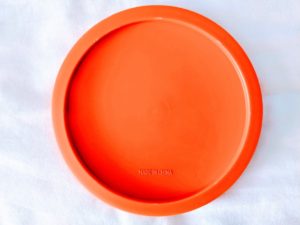 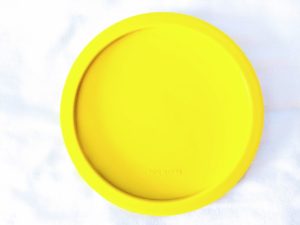 Next I noticed that the inside rim depths of the driver and midrange are absolutely tiny. I have small hands and thin fingers and struggled to adequately grip these discs. For someone with fat fingers, it might not even be possible at all. 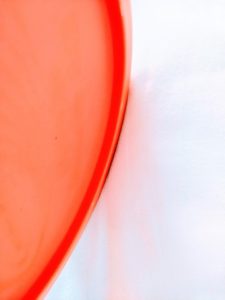 Now off to the course to try them out….

It was a 400+foot downhill hole, so I pulled out the Orange driver and went full power to let it rip. After about 50 feet the driver turned all the way over and landed nearly upside down. It rolled a little bit to the right and smashed into a rock by the side of the road.

Well, Ok, looks like I needed some more hyzer angle to throw these discs. With the midrange (aka the exact same disc as the driver) I released at moderate power at an extreme hyzer angle. Once again the disc flipped all the way over and began rolling immediately to the right and cruised across the road into the vegetation on the other side.

After gathering the strayed accidental rollers, I decided to try again at lesser power. I threw an approximately 150 foot approach shot, and it still flipped up and turned over. These drivers are without doubt the most understable supposed golf discs I have ever thrown. Trying to throw them was almost comical, but I kept on trying.

The yellow midrange smacked into a tree and became noticeably warped, but I didn’t get to take a picture of it because the next throw rolled off into a creek and after looking for about 10 seconds I didn’t even bother trying to retrieve it. With as discs of this quality, that’s probably considered littering, and I’m doing a disservice to whoever it is that eventually finds it.

The only redeeming quality from the Halex Disc Golf set is that I actually like the putter as an approach disc. It is quite understable when thrown with power but at low speeds holds a line well. The hard stiff plastic feels really nice for forehand approach shots with a flight similar to an Ultimate Frisbee.

As my self proclaimed duty to the disc golf community, I would highly recommend that nobody ever wastes their money on a Halex Disc Golf set unless you’re buying some loser discs for children under the age of ten. These discs are flat out junk. 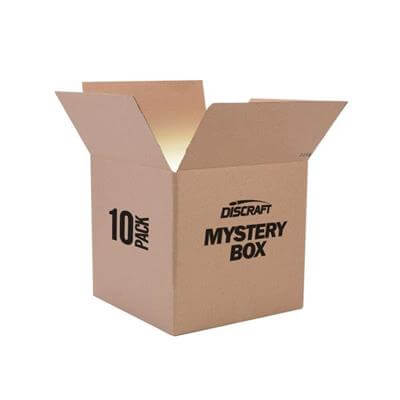