I love trying out different new brands of disc golf discs and was really excited when my package from X-Com arrived.

X-Com Sports is a Chinese disc manufacturer. Like Yikun, they actually specialize in manufacturing flying discs and in growing disc sports. This isn’t just some company looking to make any product they can at a less expensive price. XCom is a big deal in promoting Ultimate in Asia. They understand flying discs and frisbee culture. I was first interested to XCom discs after watching a Brodie Smith trick shot video he did in partnership with XCom back in 2013.

It appears that over the last seven years XCom has to expanded beyond the Ultimate scene and has entered the disc golf market. The five current XCom discs were PDGA approved on January 17th, of 2020.

After playing multiple rounds with X-Com, I am impressed. These discs make a really solid all purpose set. They provide an excellent variety of useful stabilities and I was able to shoot under par at my local course by throwing just the five X-Com disc golf discs.

The XCom discs available in the US are currently only available in a base plastic — but it is a good one. The XCom plastic has a great feel to it with good grip and adequate durability. I’d say it is better than Innova DX plastic and would compare it to the Yikun Discs Tiger Line plastic in terms of feel. This is a great feel and the popularity of the Discmania ActiveLine base plastic is testament to the quality of the blend. Like all base plastics, the XCom plastic will go through dings and experience substantial wear and tear. Despite the dents and dings, after about five rounds on some grueling courses these discs are still very usable and I haven’t noticed any changes in flight path.

If you look at the plastic pictured in a disc golf basket on the XCom website, the discs pictured there appear to be in a Championesque plastic. It appears that XCom has already experimented with a more premium plastic blend and that version will hopefully be available in the US soon.

For now, the XCom makes quality but inexpensive discs for those who want to begin playing the great sport of disc golf.

The five discs I received from XCom include two drivers, two midrange discs, and one neutral flying putter. 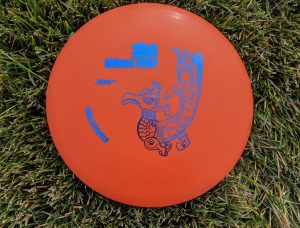 Zion Driver – The Zion Driver is a stable flying distance driver. It has a relatively thick rim and works well for forehand throws and shots that you need to finish with a strong fade. The Zion has a relatively flat top and a thin low profile. This disc doesn’t have a lot of glide and so doesn’t provide me with as much distance as I can get with some distance drivers of other brands.

For complementing a five disc XCom set, the Zion provides a lot of versatility as a disc that is stable enough for powerful throws and will finish its flight with a fading finish. This is the XCom disc I reach for when my fairway is to the side of the intended target. 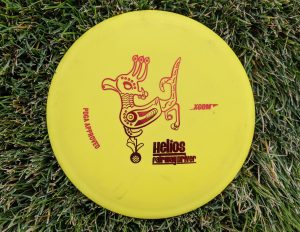 Helios Driver – The Helios fairway driver is honestly one of the best beginner drivers I have ever thrown. It is light weight, weighing 150 grams, and is super easy to get distance with. Perhaps the best thing is just how straight flying this driver finishes the flight.

This is a really understable disc and won’t overwhelm new players with an overabundance of fade. Experienced players will find that the Helios is an excellent choice for Hyzer flip shots or Anhyzer throws where you want the disc to glide off to the right. I reach for the Helios when I have a long straight fairway driver where the basket is in view. 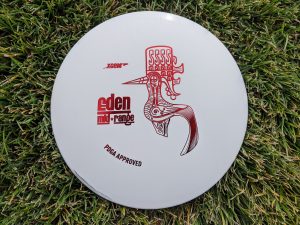 Eden – The Eden is a solid stable flying mid-range disc. It has a small diameter and thin profile that feels great in the hand. If you have a mid distance shot that you need to make sure doesn’t turn over, the Eden is the right choice for that shot.

While I prefer throwing the Eden backhand, this disc has enough stability that it also works for me for low power forehand approach shots as well. The Eden I have weighs 172 grams which helps it to have the intended flight finish with a gentle fade in the direction opposite the spinning rotation. This is an excellent compliment to the ultra straight flying Griffon mid. 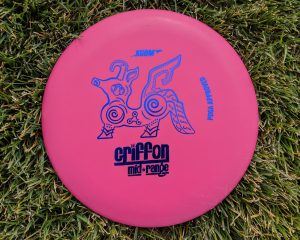 Griffon – While the Helios is as good as it gets as a driver for beginners, the Griffon is equally good as a new player Mid-Range. The Griffon has a great beadless feel and is one of the straightest flying midranges in all of disc golf. This is an understable mid, and has a light weight of just 150 grams.

Experienced players will find that the Griffon will flip over and turn to hard. For the advanced player this disc is useful for turnover shots. New players that have less than about 200 feet of distance power will find that the Griffon will hold any realease angle for the full flight of the disc. On a backhanded throw for a right handed player, if you release it at a hyzer angle the disc will float to the left. Release it at an anhyzer angle the disc will turn off to the right. With a level release, the Griffon will fly dead straight with almost no end of flight fade.

Bennu – The Bennu is a super straight flying beadless putter. I love this disc and find it to be very similar to the Discraft Fierce.  It has an excellent feel for putting, glides well, and stays straight. This combination helps the Bennu excel at long putts. In addition to its performance for putting, the Bennu is also a great driving putter. It has a moderately low profile and a completely neutral flight that does not fade.

The XCom plastic is perfect for a putter. It is nice and stiff but is tacky enough for me to have a confident putting grip. My only complaint against the Bennu is its weight. My Bennu weighs only 160g. As long as there isn’t a lot of wind, the lighter than average weight isn’t really noticeable. This is a good weight for a beginner, and allows it to stay dead straight, but I would prefer it to be a little bit heavier for when the gusts of wind hit.

If you’re new to disc golf or just looking for some inexpensive plastic, give X-Com discs a shot!