I was really excited to try out the new Hero Disc Golf starter set. This is a colorful box set with three discs designed for beginners.  The discs have excellent names and fun artwork. The basic summary is that this is a good disc golf set for beginners.

Who is Hero Discs and where did these discs come from?

In the past, Hero Discs had something to do with Innova. Hero Discs were used for Japan Open fundraisers and their website HeroDiscUSA.com sells different specialty Innova discs.  They also have a big focus on dog discs.  I’m not sure if it’s a sub brand or partner company of Innova, but it’s physical location is also in Rancho Cucamonga California. The box mentions a separate website HeroDiscGolf.com, and that website only lists this set and links to the Amazon listing.

I thought that the Hero Disc set would simply be rebranded Innova Discs. After receiving the set, it’s apparent that they are not. These discs are made in China and I’m 99% confident I know the factory where they are made.

I will describe the individual discs in detail later in this review, but these discs are manufactured by Yikun.

One really interesting thing is that the Hero Discs starter set is that it isn’t even listed on the HeroDiscUSA website. You’d think that a brand new product would be featured on the home page, but it’s almost as if they are deliberately hiding this product.

My theory is that with the reduced availability of machine time and the increased cost of plastics, it didn’t make sense for Innova to make base plastic sets for their Amazon starter sets. Instead they decided to outsource starter sets to China but didn’t want to taint the Innova brand and so elected to place it under the Innova brand.

As further evidence to back my theory, he seller and shipper of these discs on the Amazon listing is Innova Champion Discs, not Hero Disc. 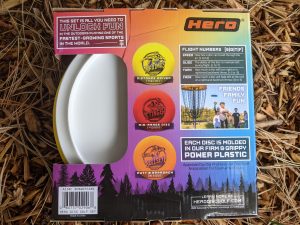 If my theory is correct, what surprises me is that Innova used the same existing Yikun Molds that are already found in some of the existing sets they sell. I would have thought that the original patent holder for the bevel edge driver would have created new unique molds.

Review of the Hero Disc Set

When Yikun made their original disc golf starter set in 2014, it was a good one. Their initial plastic quality struggled, but they have improved on it over the years and it now has a great feel and adequate durability. When you compare the Hero Disc set disc selection to the others made by Yikun, I’d say this one is the best of them all.

Compared with Innova base DX plastic, Hero Disc “Power Plastic” is a little softer and provides better grip.  The discs in the set I received are all light weight, in the 150-155 gram range. Light weight discs like this are good for beginners, but are generally too light for players as they develop technique and get more experienced. 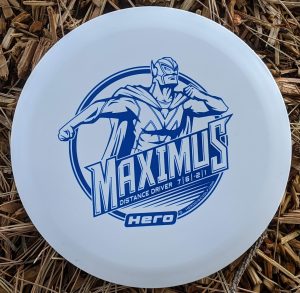 The Maximus Driver appears to be the same thing as the Yikun View and the Sune Sport Night Trooper.  I’m fairly certain that it’s the same as the Kestrel Driver, but I lost mine and so cannot compare to verify. This is a fantastic first disc golf driver, especially in its light weight.  For a bevel edge driver, this disc flys very straight when thrown at the right power level. The Maximus will provide new players with noticeably more distance than they will be able to achieve with the putter and driver. For some disc golf sets, this is not always the case. 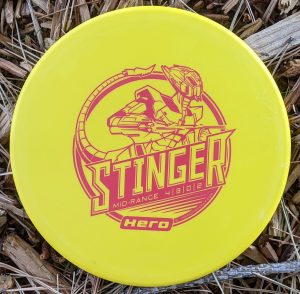 This is a stable to overstable speed three approach disc with a small bead on the rim. It has a flat top and mostly straight flight path when thrown flat and level, but has a little bit of end of flight fade.

Apparently some people think this is a good midrange for a starter set, but not me. This is a very thin rim mid that doesn’t really provide any different flight characteristics than the putter. New players aren’t going to achieve more distance with the Stinger than they will the Bullseye putter, nor do they get a different flight stability. What is the point of having three discs in a disc golf set of two of them do the same thing. Personally, I think that a good disc golf set should have a faster, more understable midrange that will provide a more neutral flight for beginners. 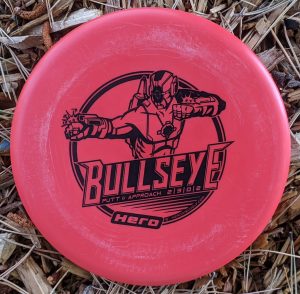 The Bullseye putt and approach disc is a beadless low profile putter with a good feel. This has a nice neutral flight which allows this disc to fly straight for both putting and trhowing. While I personally like the slower “lid putter” used in the Kestrel, Sune and Yikun sets, the Bullseye is probably better for starter sets as it has a more traditional disc golf feel to it.

While the Hero Disc set is a good disc golf set and is the best among those made by Yikun, the plastic quality and hybrid midrange do not give this set the best value. For the same price you can purchase disc golf sets with better plastic. For similar plastic but a better midrange and lower price there are also sets that I would recommend above the Hero Set. For my top recommended disc golf sets, read this post.

The sport of disc golf is growing rapidly.  That growth has been fueled, in part, by videos of phenomenal shots that have gone viral on… 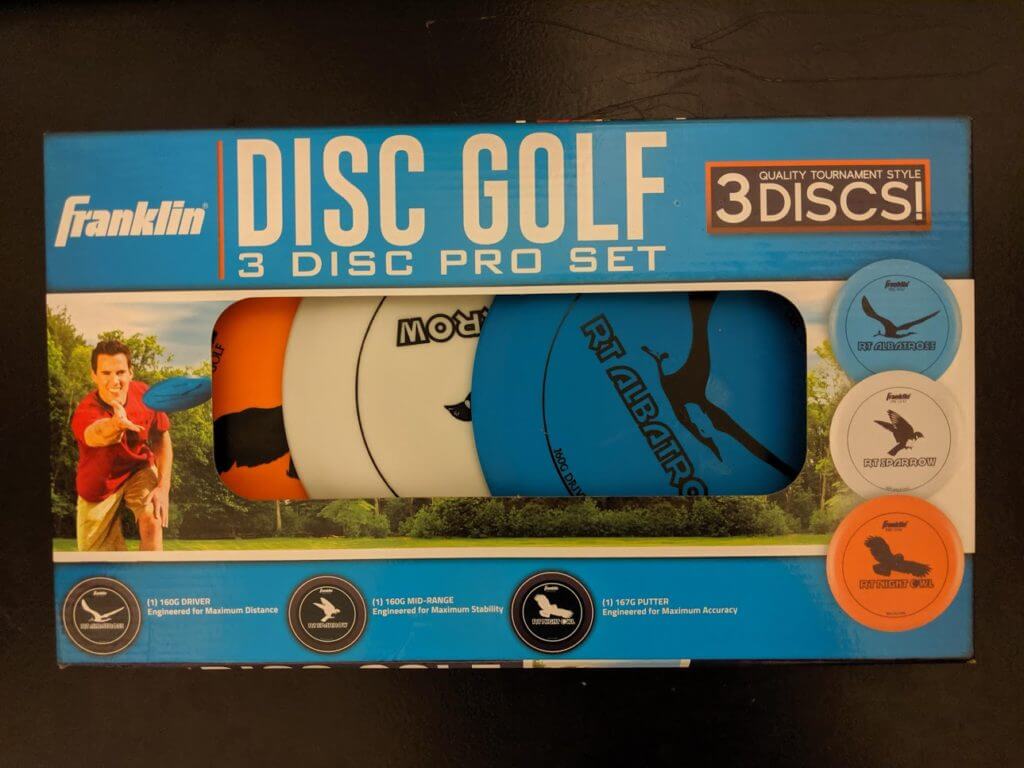 For only $10 I purchased the Franklin Disc Golf set from Walmart.com My reviews of inferior disc golf sets continue, and for the third time… 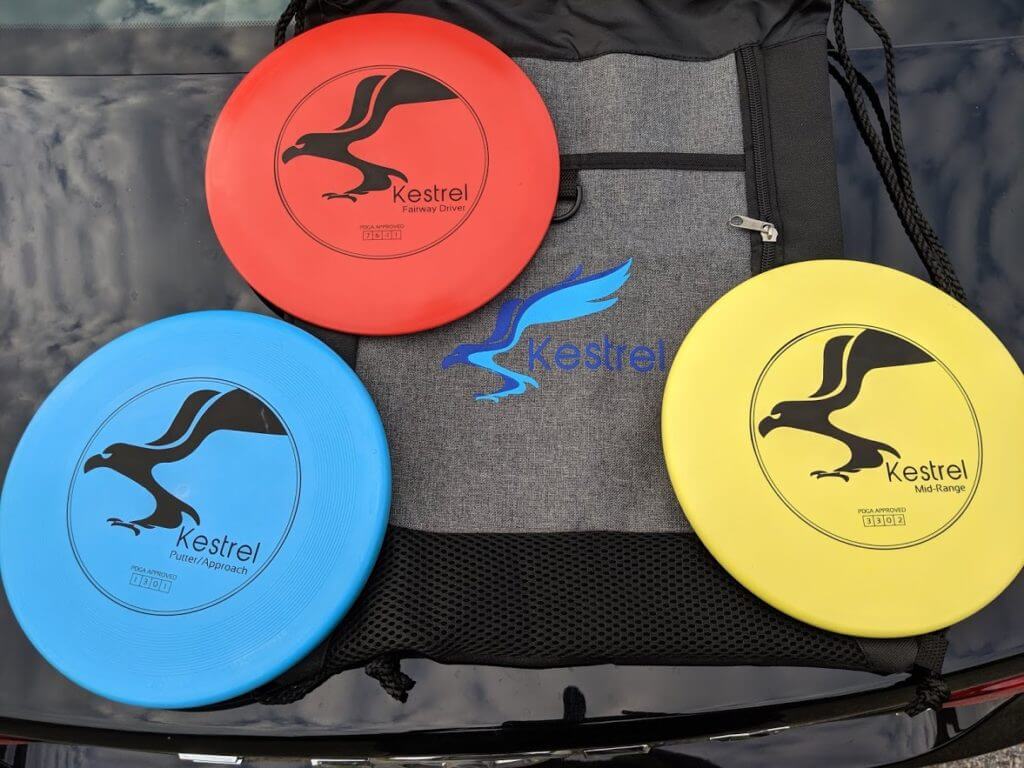 When my Amazon order arrived with my fresh Kestrel Outdoors disc golf set, I eagerly opened the package in anticipation to see what this brand…