Continuing on this series of discs that throw similar to each other, we will look at what throws similar to the Teebird. The Teebird is loved by many people, I often recommend it to somewhat beginners (as a second driver). It is a very reliable overstable disc, and can be thrown by a good portion of the disc golf community.

For the comparison we’ll throw the Legacy Rival, the Dynamic Discs Evader, the Latitude 64 Explorer, and the MVP Volt. Fortunately all of the test discs used have been thrown a lot and are somewhat similarly beaten in. Leveling the testing ground for these discs, giving a good depiction of their true flight. 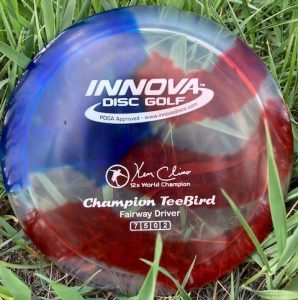 The Teebird is an awesome disc. The rim is a good size, not too large nor too small. The rim doesn’t have too sharp of an edge, making it fairly comfortable to grip whether backhand or forehand. The overall feel of the disc is pretty awesome, really comfortable!

The speed of the disc suits my arm quite nicely. I can get a pretty straight flight with a solid fade at the end of the flight. I like the reliability of the disc, I can get some pretty decent distance with it as well. It is probably my most used disc. As it gets used more and more, it does start to exhibit a little bit of a turn right before the fade. Providing an excellent flight path that can be used in various situations. 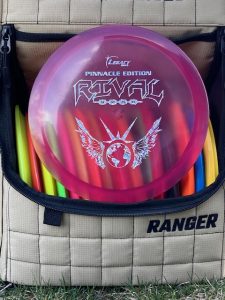 The Legacy Rival, this is a pretty great disc as well. I think that this does have a little wider rim than the Teebird. The rim is probably a little taller as well – the rim just feels bigger than all of these discs. I got this disc in a gummy pinnacle feeling type plastic. Probably the only plastic that I have really enjoyed from legacy. Not to say they have crappy feeling plastic, but this pinnacle plastic, I just loved how this particular one feels!

The flight path is so similar to my Teebirds, very straight with a little bit of turn before the final fade. It is very reliable, consistent and easy to work with. There was a time where I was throwing this more than my Teebird. It is definitely a solid workhorse within my bag. 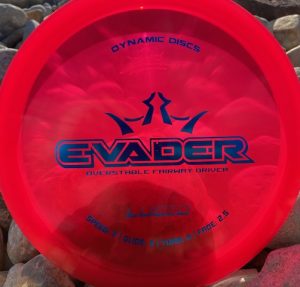 The Evader is a new disc on the market. I really enjoy this one as well. The rim seems to be a little thicker than the Teebird’s rim. At the moment, it is only available in lucid plastic. Which, I really like how lucid feels, it is really durable and slightly gummy. Overall a real good feel to it.

The Explorer is Latitude 64’s take on this type of disc.  It is a little taller than the Teebird, but the in hand feel this height isn’t noticeable to me. The thickness of the rim is very similar as well. For me, this means that a backhand grip is very similar to a Teebird. I’ve only thrown this in the opto plastic, which I think is the best plastic from Latitude 64. It has a great firm but slightly flexy feel to it. It is also so slightly gummy and I like the amount of grip this plastic offers. Overall, the Explorer feels very nice in the hand.

I found that the Explorer was not as overstable as the other discs within this bunch. But it does still have a predictable flight path. I really noticed the difference in stability when I put the Explorer on an anhyzer line. I found that it would hold that line longer than the other discs within this group. The best way I can describe this disc’s flight path, is that it is akin to a very beat up Teebird. So a really sweet disc in all reality. 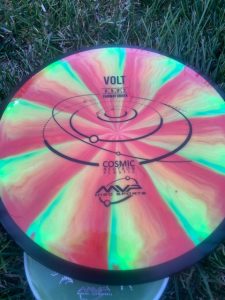 The Volt is a great feeling disc. The rim feels very similar to the above discs. It has a good rim thickness to it, being pretty comfortable in a power grip. The forehand grip is real comfortable as well.  My two finger grip fits nicely into this rim size, making for a great and comfortable fit.

MVP Volt is a excellent disc. This one is a little faster and  has a little bit more turn than the Teebird, however, it is still very reliable and has a similar flight path. This disc does seem to be a little bit more shapeable and more controllable for my liking. The stability of this disc is reliable, consistent, and workable. It is a phenomenal disc to throw around.

Comparing these discs to each other; the Evader, the Explorer, and the Teebird all feel real similar to one another. I’m unsure if I would be able to tell a difference between the three. The Rival feels bigger, even though it is pretty similar in size. The Volt, does not feel like it should be as overstable as it is.

To test the differences between these discs I threw these down a “tunnel”, I wanted them to remain within the tunnel. This was a downhill throw as well where I had a tree line on my left side with a road on the right side.

Where this is a very control shot, I was not throwing hard, but working to shape the shot. In this test I gave myself one shot to allow for a more controlled consistency amongst all the discs. To me, it felt that I threw the discs just as hard as each other. In this situation I wanted a slight flex line to keep the disc very straight. Despite the length differences, I was still able to get a sense of their stability. Each disc held the slight anhyzer line for as long as its counterpart before it would flatten and then fade. The entirety of their flight I could tell that they were working to get out of the anhyzer line and get to flat.

Overall these 5 discs have very similar flight paths and are very true to the manufacturer depictions. On average, I think I can get more distance out of the Volt than the other molds. Additionally, it seems that the Teebird beats in fast, and the new runs are not as overstable as the older runs of Teebirds. While the Rival feels larger than the other molds, and the Explorer and Evader are very identical. To me, it seems that the Evader was the most overstable of the bunch.

The differences I’ve mentioned are slight, and I think that you would be just as happy with either one of these discs. They’re all great, enjoyable to throw, and very reliable. For now, I think I’m going to go throw some more discs. Have you thrown any of these, what are your thoughts?