We’re keeping things rolling today here in the Round of 16 of the Disc Golf Reviewer World Series of Putters! In this series, we are searching for the best putter in the world and hoping to provide the disc golf community with a plethora of information along the way to help everyone decide what putter is right for them. This is an NCAA basketball style tournament and project where every day I test two putter molds against each other on the putting green in a head-to-head competition before posting here about my experience and the results.

Today, we have the second and final match of the Round of 16 in the Envy region of our bracket. It’s the 7 seed Prodigy P Model S taking on the 11 seed Yikun Hammer. The Prodigy P Model S started off its World Series of Putters with a victory over the unique 10 seed Innova Polecat (53 to 49) and then followed it up with another win over the 15 seed Doomsday Bleak (63 to 43). The Hammer benefitted from some misfortune for its opponents in the first two rounds. Both the 6 seed Discraft Roach (42 to 41) and the 14 seed Divergent Nuno (56 to 51) had spit out putts that cost them the match. 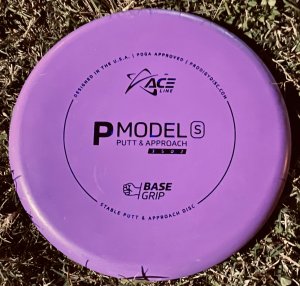 The Prodigy P Model S has a nice shape and flight, but I think my favorite thing about this disc is the Base Grip plastic blend. The P Model S is part of Prodigy’s Ace Line, which are discs made in China by Yikun meant to be less expensive and more beginner friendly.

The Base Grip P Model S doesn’t feel like the other base plastics I’ve seen made by Yikun. The Ace Line Base Grip is quite stiff and has a very smooth finish. At first, I thought it might be too slick, but once I started putting with it, the grip felt sure, and I really liked the consistent feel such a stiff and smooth plastic provided me. 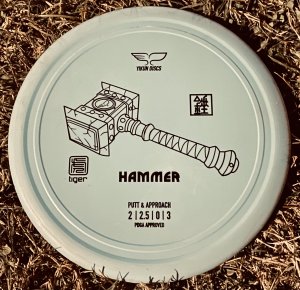 I think in the last round I made a comment that I was surprised the Yikun Hammer wasn’t a 1 speed disc. This was foolish of me, because I made an erroneous judgement based on the Hammer having a thumbtrack design. After spending more time with it, I think the rim shape (excluding the extra “speed bump” thumb track around the top of the disc) is what I like most about this disc. The Hammer is definitely a 2 speed disc, and that speed helps provide a reliable flight that makes the longer putts more attainable.

In this series, we are using the Tiger Line Sensei. Tiger Line is Yikun’s base plastic that is moderately soft with a nice grippy feel that is almost rubbery.

These discs are pretty different from each other. First of all, the Yikun Hammer is pretty overstable and designed to be more of an approach disc, while the P Model S is designed to be more versatile and stable putt and approach putter. But the Hammer has proven to be a capable putter in this series so far.
The Hammer has a thumbtrack as well as an additional bump that goes around the top of the flight plate. The P Model S has a similarly flat flight plate, but it doesn’t have anything like a thumbtrack.
The P Model S is beaded and the Hammer is beadless. But the Hammer’s beveled bottom of the Hammer’s rim gives it more of a lipped shape that helps provide its more overstable flight. The P Model S is also a bit unique for beaded putters. It is a smaller bead and a pretty thin rim that makes the bead feel pretty prominent in the hand.
The Hammer is pretty shallow in its height, though the thumbtrack rim makes it feel a bit taller in its grip. Conversely, the taller P Model S feels shorter than its measured height because of the very flat flight plate that extends out to its rim as well as its relatively smaller rim thickness.

For more info on the format and scoring system I used to test these putters against each other, be sure to check out our main World Series of Putters post.
I conducted this match on a cool windless evening under a conveniently placed streetlight at my local disc golf course on a permanent Innova Discatcher basket. After warming up, I flipped a coin to see which putter would be thrown first for the first round of putts, and it was the P Model S. Here is how it all played out:

Looks like the Yikun Hammer is tired of me calling it an approach putter. The 11 seed Yikun Hammer surprises me once again by putting up a high score to take down the 7 seed Prodigy P Model S in the Round of 16. Final score: 69 to 56. 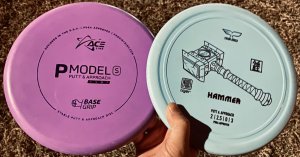 I called the Yikun Hammer lucky to win its first two matches, and the Yikun took luck out of the equation with its highest score and one of the highest scores of the entire tournament. But good and bad luck are inevitably a part of any competition, and it isn’t the Hammer’s fault that the discs it faced in the first two round had round altering spit outs.
But beside that, I’m really just so surprised by how well I keep doing with this disc. I’m mainly surprised because of how much I don’t like the placement of the “speedbump” around the top of the flight plate. Perhaps other putter grips wouldn’t be as bothered by this, but for me the bump is right where I want to put my thumb, so I’m left unsure if I should move it inside or outside of it. What I found ends up happening is I place it on top of the bump and as I throw the putt, my thumb slides toward the outside of the putter and rests against the thumbtrack. Apparently, it’s working, but you generally don’t want to have movement like that in your grip as it can lead to inconsistency in your putt.
As for the P Model S, this is one of those beaded putters that I’d previously mentioned I had some issues with on the grip and release. I overall did better this round with it, but I do think that concern with the bead was in play for a few of the 40ft putt attempts. I’m not trying to say the shape and bead on this disc is bad, but at least for my grip and putt, I would personally feel more confident with a different putter.

For a putting putter, I’d honestly probably look for other options besides these two discs. But if I were to choose between these two, I’m for 3 victories in a row not going to choose the Yikun Hammer. Sorry, not sorry–I still think this disc is an approach disc, and I’d feel more confident in the grip of the P Model S, even with my concerns about its bead.
But it looks like my doubt only makes the Hammer stronger, and it will have a chance to prove me wrong once more against the 1 seed Axiom Envy–another disc often considered more of an approach disc than a putting putter.
Tomorrow we move to the Aviar region where the 5 seed Dynamic Discs Warden will be taking on the 9 seed Discmania Link. Check back tomorrow for those results.
5/5 - (2 votes) 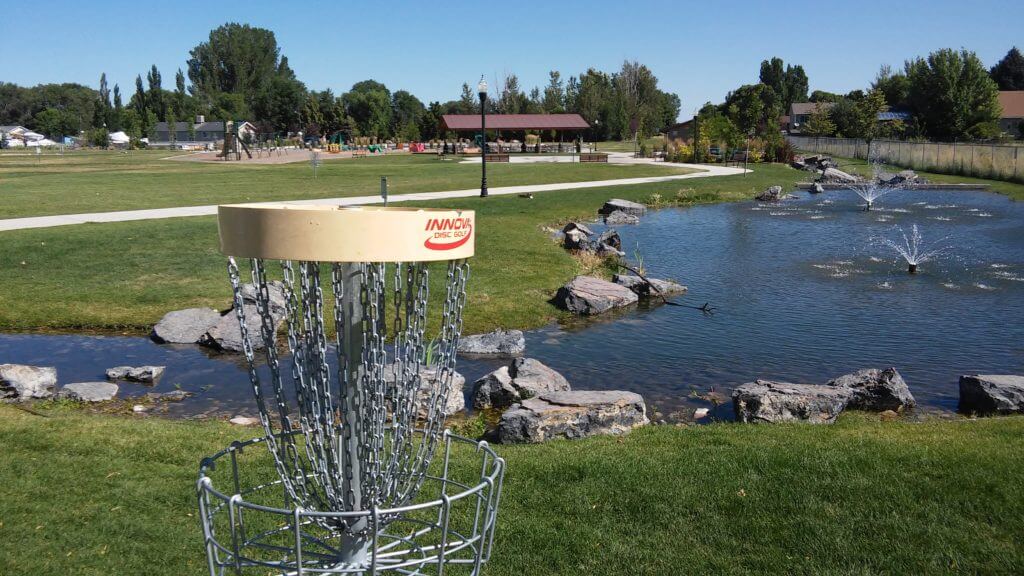 Not everybody has a disc golf course they can play right in their back yard. What if you want to set up your own course…