The disc golf market is flooded with all kinds of discs. It seems that there are a lot of duplicate discs between all the brands as well. Ever since Innova released the Destroyer, other brands have worked to replicate it, due to its huge success. Thus far, their efforts haven’t been as fruitful as the Destroyer’s. Is that because they’re not as good? Or is it simply that the Destroyer is the best? 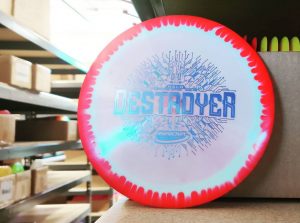 In the past I had two Destroyers, both of which I hated. Both of them were overstable, and as a beginner, I could not throw them at all. Which made me believe that they’re not that great of a disc. It also baffled me as to why it had such a big following. As I thought only big arms could throw the disc as it should be thrown. However, since then I have learned some things that I hope to share with you and that you’ll enjoy. All the while comparing a few discs that are supposed to be like the Destroyer to see which one is best.

I grabbed a few of the brands and went for a field day. For comparison side by side I grabbed the Innova Destroyer, Discmania DD3, Infinite Discs Emperor, Discraft Zeus, and Dynamic Discs Raider.

To set the scene a little bit for you, my drives rang within the 320′ – 360′ generally. My form is pretty consistent, so much that I can replicate a throw about 70% of the time. Meaning that I get the same flight path and land within 45′ radius of the last throw (going for distance). This is what I discovered through comparing these 5 discs.

Out of these discs that I threw, I liked the Infinite Discs Emperor more than all of the other discs. This was due to its stability. With that said though, I only liked it a little bit more than the other ones.

The Emperor was my favorite as it was more stable rather than overstable, like what a Destroyer is advertised as. Weirdly enough, the Destroyer’s stability can vary. The overstable Destroyer is too much for me to throw, it always dumps left for me. All my other Destroyers have been this, very overstable and difficult for me to throw. This video is quite helpful explaining the difference in variation.  You can watch it on your own time by clicking here, or watch it below:

Looking at these discs that I threw, and comparing how they flew. This is how I would rank them from stable to overstable:

The Raider was by far the most overstable disc of this batch. I didn’t like throwing it, it always flew straight and then dumped. The disc never flew out to the right a little like the other discs did, no “S” curve to it. On average, I could throw this disc around 320 feet.

The Zeus had nothing to note about it for me. It did fly well though, I would get it to fly out to the right a little before it would fade out. On average I would throw this one around 340 feet.

The Destroyer was a little on the overstable side, again this is very slight difference. Sometimes I would get it to fly out to the right a little bit. On average though, I would throw this around 330 feet.

The DD3 was a little more on the stable side, this was more comfortable for me to throw. Its flight path would exhibit a very slight “S” curve. My average throw was around 345 feet.

The Emperor was the closest to stable for me of the bunch. Hence, it was the easiest for me to throw. Which lead to me getting the biggest distance out of it. Making it my favorite disc out of them all. My average throw was around 345 feet.

These results showed me that the “overstable” discs didn’t go as far as the “stable” discs. That getting the right disc for my arm speed gave me on average an extra 25 feet in distance. Or, the right disc gave me around 7.81% more distance than the “not so right” for me disc.

At the end of my research, comparisons, and field testing; I found that the Infinite Discs Emperor was the best disc for my arm speed. Since then, I have thrown a other Emperors. Some of them I have liked, and others I have not liked. Shouldn’t all Emperors be the same?

I was able to discuss with Innova the reason for the variances within the Emperors and Destroyers. Innova informed me that, the ambient temperatures affect the rate at which the discs will cool. Resulting in a slightly different profile. This explains why we see the differences we saw in the above video and picture (two blizzard destroyers). This makes me believe that other brands experience the same problem. Looking through other Zeus’s and Raiders, I noticed some slight differences among them all as well. So what does this all mean for you?

For me, I ended up liking that specific Infinite Discs Emperor the most, just marginally though. These 5 discs are extremely identical in getting around the same amount of distance. Of course, the outlier measurements are drastic (300′ for the shortest distance 350′ for the longest). But on average, there wasn’t too much of a difference between them all. For these purposes, the average number is a better comparison because it is more indicative to the normal than the one instance.

This has also lead me to see that through researching, comparing, and testing, I got the “right” disc for me. That “right” disc gives me on average 8% more distance than other similar discs. To me, that 8% more distance, 25 feet more, is not worth the time I spent figuring all of this out (the differences in profiles, whether this disc is good for me, and field testing them all). I would have been better served spending that time practicing my putting or approach shots. For me, that 8% more doesn’t affect my game that much right now. For me, it is best to find molds that excite and push me to play; not worry about small differences.

What do you guys think, at what point is it worth it to worry about that extra 8%?

1 thought on “Destroyer or a Replica, Which is Better?”