Welcome back to the second round in the Envy region of the Disc Golf Reviewer World Series of Putters! We are searching for the best putter in the world and hoping to provide the disc golf community with a plethora of information along the way to help everyone decide what putter is right for them. This is an NCAA basketball style tournament and project where every day I test two putter molds against each other on the putting green in a head-to-head competition before posting here about my experience and the results.

Today’s match features a couple of discs that pulled off upset wins in the first round. The 11 seed Yikun Hammer is going up against the 14 seed Divergent Nuno. The Hammer narrowly took out the Discraft Roach in the first round with a score of 42 to 41, and the Nuno decisively defeated the MVP Nomad 65 to 35. 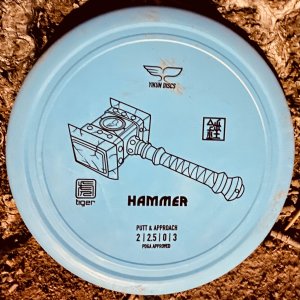 Another surprise is the additional line or bump that goes around the top of the Hammer’s flight plate just inside the thumbtrack. It functions kind of as a second thumbtrack, but for me, it is quite annoying as it is exactly where I want to place my thumb when gripping the putter.

For the World Series of Putters we are using the Yikun Tiger Hammer. Tiger is Yikun’s moderately soft base putter plastic blend. 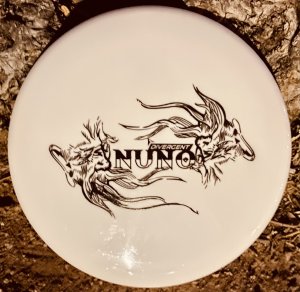 I think the surprise here was just how well this putter glided while I putted with it for the first time. It was a straight and true putter for me, and I put up a really solid score in the first round with it. It is a tall beaded putter that should offer a nice floaty flight on the putting green, but it really was an effortless experience with this disc the first time I used it.

Another surprising element to the Nuno that didn’t surprise me as much because I’d already used the Narwhal is the unique look and feel of the Max Grip blend Nuno. Divergent’s Max Grip plastic has a glossy finish that looks more like a premium driver plastic but it has a really nice tackiness that makes it grippy like a putter plastic.

These discs are quite different from each other in a lot of ways. I think a difference of .6cm in height might be the widest difference we’ve seen in a match so far. As you’d expect, the very tall Nuno boasts a high glide floaty flight while the lower profile Hammer features less glide.
The lower profile on the Yikun Hammer along with its blunter shaped rim helps it to slow down and begin its strong overstable fade earlier in the flight. I think I said this in the last article, but the Hammer really is designed to be more of an overstable approach disc than a putting putter. However, once I adjusted to adding a little more zip to the putts with the Hammer, I thought it performed well and the overstable flight wasn’t too egregious for the putting green.
Another major difference that needs to be accounted for when choosing between these two discs is their rim shapes and how they impact the way you grip the disc. Like I shared above, I found the thumbtrack and additional bump along the top of the Hammer to be a real challenge while trying to find a grip I could feel confident in during my putts. It also has a blunter rim, but that isn’t difficult to navigate especially because of how short of a disc it is. The Nuno on the other hand feels like a standard beaded putter when you grip it, but it does have some additional height that impacts the grip as well. 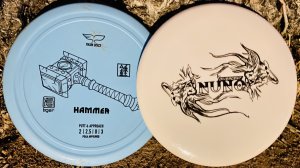 For more info on the format and scoring system I used to test these putters against each other, be sure to check out our main World Series of Putters post.
I conducted this match on a clear evening under a bright full moon and a conveniently placed street light at my local disc golf course on a permanent Innova Discatcher basket. After warming up, I flipped a coin to see which putter would be thrown first for the first round of putts, and it was the Divergent Nuno. Here is how it all played out:

It was another tight match today! In a bit of a surprise finish, the 11 seed Yikun Hammer put up a perfect score from 20ft on its way to eliminating the 14 seed Divergent Nuno with a score of 56 to 51. 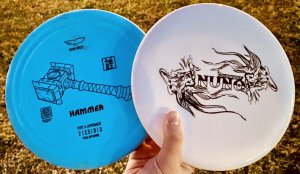 If we were awarding a “luckiest putter” award for this series, the Yikun Hammer would have to be the front runner at this point. In the first round, it benefited from a slew of spit outs from the premium plastic blend Roach. In this round, there were two crucial and killer spit outs from 30ft for the Nuno as well as a surprising 3 putt deficit from 20ft.
This match was the first sign of trouble for me with Divergent’s Max Grip plastic blend. I at first was concerned about the possibility of spit outs and grip problems due to its glossier finish, but to this point I’d had nothing but great success with it. Spit outs can happen to any putter, but to have two putts slip through the chains in this fashion in a single match is a bit concerning. Perhaps the plastic blend isn’t to blame, but at this point my confidence has at the least been slightly shaken.
I also thought the Hammer’s overstability wasn’t as hard to adjust for in this match as it was in the first match. I felt much more confident lining up the putts and trusting the speed and glide to be sufficient.
That being said, the Hammer is still a true approach putter for me and not really a putting putter. The thumbtrack grip could be helpful for approach shots, but on the putting green I’m just trying to ignore and avoid those parts of the putter when gripping it. Despite my opinions about it not being a real putting putter, it has survived two matches and is on to the round of 16.

Despite the defeat, I’m going to recommend the Divergent Nuno for a putting putter. I’m a bit concerned by the spit outs, but not enough to completely forget how well this disc did in the first round, and it still put up a solid score here in the second round.
But it’s the Yikun Hammer that will be moving on to the next round where it will face off with the winner of tomorrow’s match between the 7 seed P Model US and the 15 seed Doomsday Bleak. Be sure to check back tomorrow to get those results!
5/5 - (1 vote) 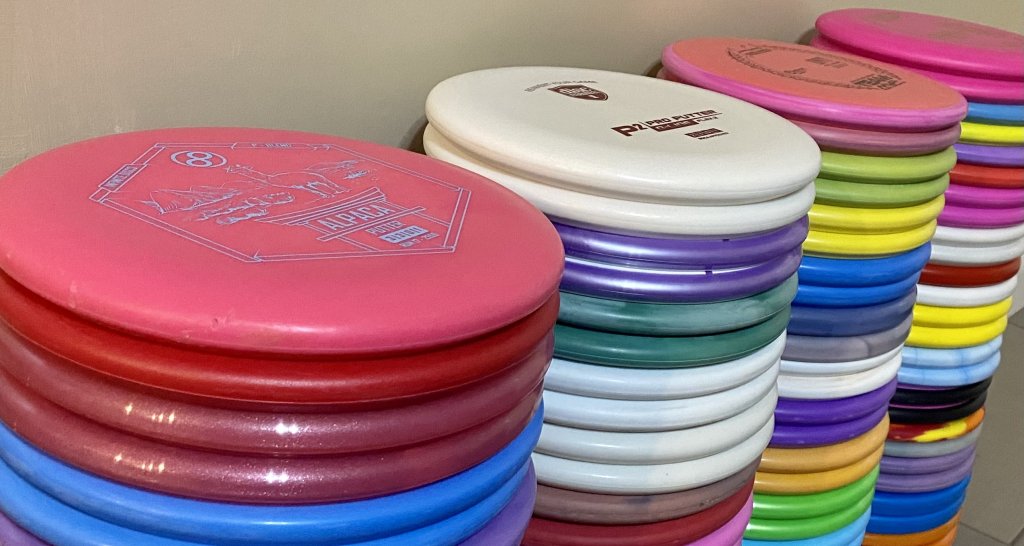 The tournament bracket for the 2022 Disc Golf Reviewer World Series of putters is here and we are ready to roll! All 64 putters have… 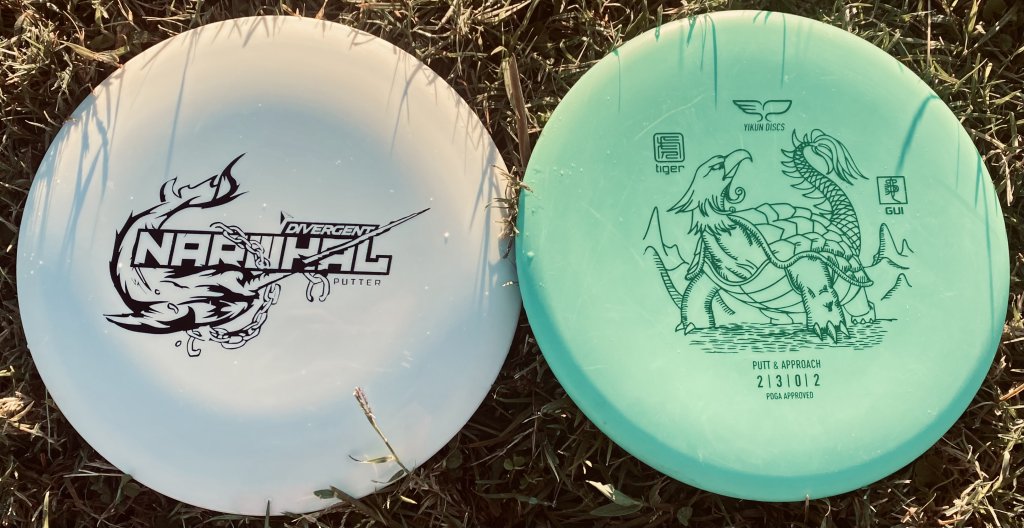 Happy Halloween disc golfers! We have a spooky match for you today in the second round of the Disc Golf Reviewer World Series of Putters.… 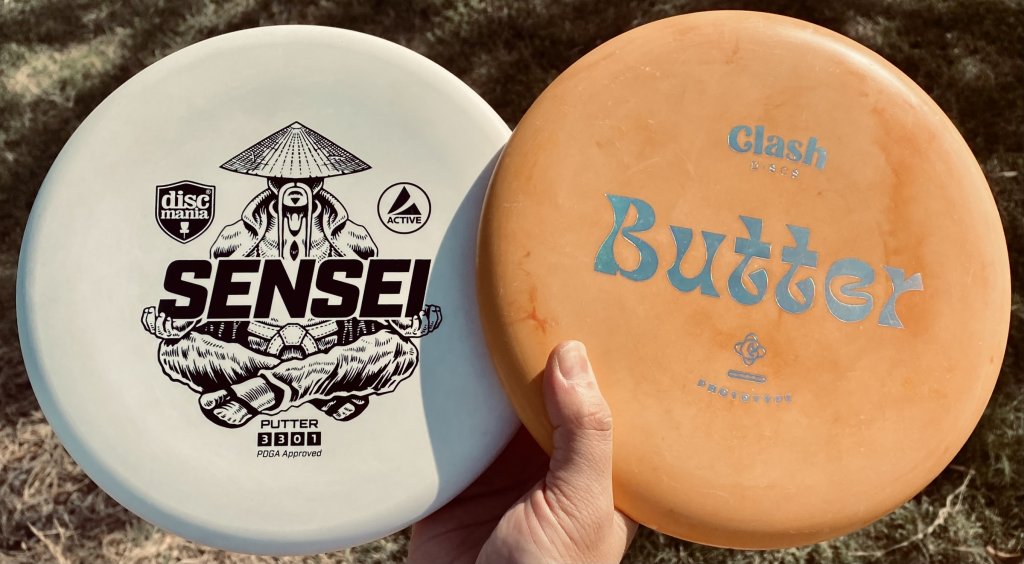 We are back for another second round match in the Envy region of the bracket for the Disc Golf Reviewer World Series of Putters! We…