We have another all Trilogy matchup today in the second round in the Aviar region of the Disc Golf Reviewer World Series of Putters! In this series, we are searching for the best putter in the world and hoping to provide the disc golf community with a plethora of information along the way to help everyone decide what putter is right for them. This is an NCAA basketball style tournament and project where every day I test two putter molds against each other on the putting green in a head-to-head competition before posting here about my experience and the results.

Today’s match features the 5 seed Dynamic Discs Warden going up against its Trilogy cousin, the 13 seed Westside Shield. In the first round the Warden took down the 12 seed RPM Ruru 53 to 31, and the Shield defeated the 4 seed Thought Space Athletics Muse 63 to 44. 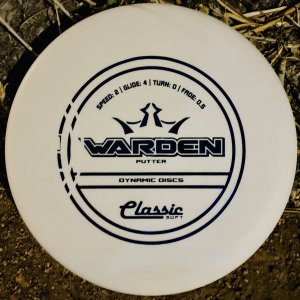 I had thrown the Warden before this series, but it had been a while. So when I started warming up for the first round match, I was surprised by just how shallow the Warden feels in the hand. I knew it wasn’t the tallest disc in the world, but I didn’t remember it feeling so small in my hand. I’m also not saying it is crazy shallow–it is relatively tall beadless putter with fair amount of glide. It just felt shorter in my hand than I expected.

For this match I used a pair of X-out Classic Soft Wardens. Classic Soft is the softest putter plastic available from Dynamic Discs, and it is pretty soft and flexible in the hand. 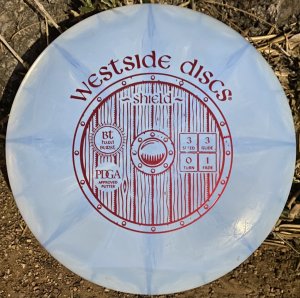 One surprise with the Shield is when I realized it actually has a bead. It has a tall beveled rim similar in shape to the Infinite Discs Alpaca or the Discmania P2. But the Shield also has a slight bead shape along the bottom as well that is pretty easy to miss if you aren’t looking for it.

I’m also surprised that the Shield isn’t a more popular option on the putting green. Like I said, it is pretty similar to two of the best selling discs in the world in the Alpaca and the P2. Westside is maybe the least popular of the three Trilogy brands, but their discs are just the same quality. The Shield would probably be near the top of my list for underrated putters.

BT Hard Burst is the plastic blend of Shield that we are using in the World Series of Putters.

I mentioned this in the first round article, but I think that height spec is off on the Shield. 2.5cm is .2cm taller than any other putter we’ve tested, and it looks and feels closer to discs in the 2.2cm range. But still, it is quite a bit taller than the Warden, which should give it a bit more glide.
This is another beaded vs. beadless match as well, as the Shield is beaded, and the Warden is beadless. But since the bead on the Shield is pretty easy to miss, I think the beaded/beadless element of this match is minimal. Instead, I think what comes into play more is the height I mentioned above as well as the plastic blends.
The Classic Soft Warden and BT Hard Shield are similar in their grip since they are the same quality of plastic made by the same manufacturer, but they feel very different since the soft Warden is very flexible while the Shield is a very hard and stiff blend. I generally prefer the stiffer plastic blends since they provide a consistent grip and release. 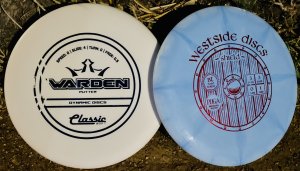 For more info on the format and scoring system I used to test these putters against each other, be sure to check out our main World Series of Putters post.
I conducted this match on a perfect evening under a conveniently placed streetlight at my local disc golf course on a permanent Innova Discatcher basket. After warming up, I flipped a coin to see which putter would be thrown first for the first round of putts, and it was the Westside Shield. Here is how it all played out:

They put up the same score from 2o and 30ft, but the Shield choked from 40ft today. The 5 seed Dynamic Discs Warden is going to the round of 16 after defeating the Westside Shield 59 to 44. 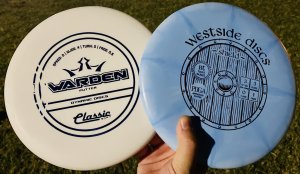 The Classic Soft Warden is apparently out to prove that there is a place for soft and flexible plastic blends late in this tournament. If I’m being honest, I was really shocked by this result. In terms of plastic blend, glide, height, bead–in pretty much every aspect I would have given the Westside Shield the advantage. What’s more, I would have expected those to be even bigger advantages from 40ft.
Some days I just putt worse from 40ft, but for the Shield to put up a goose egg from that distance in the same round that another putter made 3 of them is really surprising and really difficult to just ignore as an outlier.
If I try to find an advantage the Warden had in this match, I think it would have to be the rim shape. While I said I was surprised by how shallow the disc felt, I also think the Warden’s round and not too thick rim shape fits really well in the hand and offers a smooth release. Perhaps the folks who prefer beadless putters have a point that I’ve had a hard time consciously recognizing as I putt the discs, but overall beadless putters have been doing very well in this tournament.
Whatever the exact reason, the Warden gets the win. The Warden is a fantastic putter, and though I thought the Shield may have been a better option for me, I’m not surprised to see a proven quality disc like the Warden come out on top and make it to the round of 16.

These are both great putters! If you have been hesitant about trying out a taller putter, the Warden might be the perfect fit as it gives you some added height without feeling like a literal handful when you grip it. And I stand by what I said before about the Shield being an underrated option for putter. If you like tall putters with a lot of glide and you haven’t tried the Shield yet, you are missing out!
Tomorrow we continue the matches in the Aviar region as the 3 seed Prodigy PA-3 takes on the surprising and unique Divergent Discs Alpas. You are going to want to be sure to come back for that one!
Rate this post

This is the first second round match of the Envy region in the Disc Golf Reviewer World Series of Putters! We are searching for the… 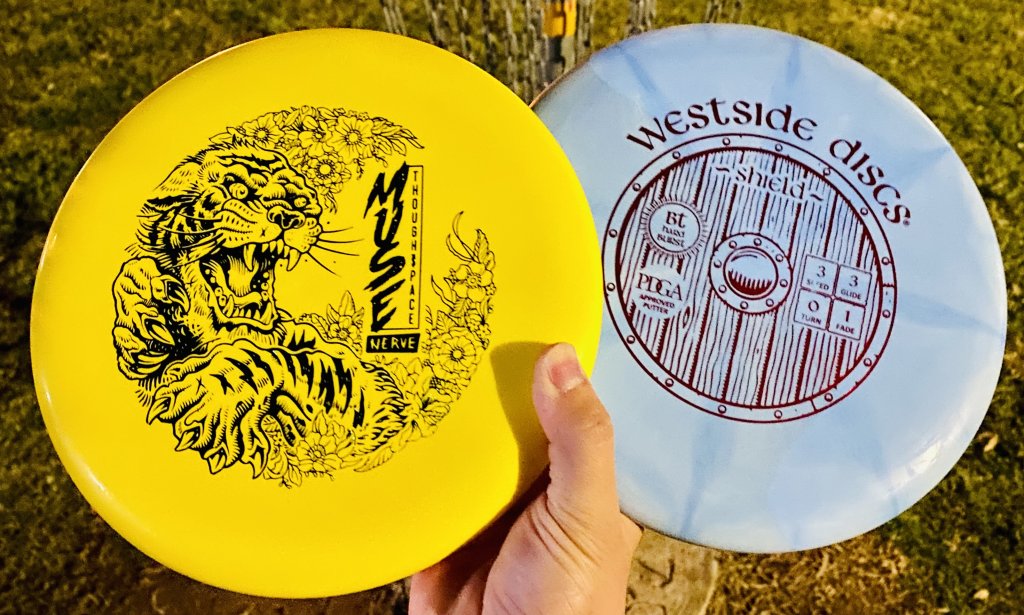