The Disc Golf Reviewer World Series of Putters as we move across the bracket for the first match in the P2 Region. Today it’s the 1 seed Discmania P2 going up against the 16 seed Yikun Meteor Hammer. First, let’s take a closer look at each of the discs. 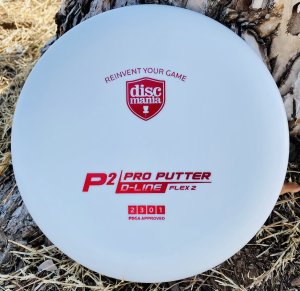 The Discmania P2 is an interesting piece of disc golf history. The original P2 mold was manufactured by Innova, just like all of Discmania’s original molds. But in recent years, Discmania and Innova had a falling out, forcing the P2 to fall out of production to fall out of production at the height of its popularity. Then last year, Discmania released the new “made in Sweden by Discmania” version of the P2. The new P2 has been an instant success and continues to be one of the best selling discs in the world.

The P2 is a very tall, beadless putter that offers a lot of glide that is great for “push” putters and spin putters alike. It flies straight to slightly overstable. It is very comparable to the Infinite Discs Alpaca (widely believed to be the same or close to the same mold as the original P2 mold).

For our testing today we will use a P2 in D-Line Flex 2 plastic. 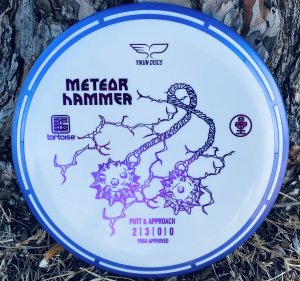 The Meteor Hammer is another uniquely molded putter from the Chinese manufacturer Yikun Discs. The Meteor Hammer has a common putter shape, but it uses a unique overmold to create that shape. Unlike MVP overmolds that have a near seamless transition between plastics on the rim, the Meteor Hammer’s overmold visibly overlaps with the rest of the disc creating a sort of joint that can be seen all around the top of the disc.

The Meteor Hammer is tall and beadless, and the overmold helps to create a very straight and stable flight that makes it a really nice “point and shoot” kind of putter that has very little turn and very little fade.

The Meteor Hammer is exclusively available in Yikun’s Tortoise plastic blend, which is just what they call the plastic for their overmold molds since they resemble a tortoise shell.

Though these discs look very different from each other because of the Meteor Hammer’s overmold, when we look at the specs, they are quite similar to each other, and they feature a similar rim shape when we look at the profile picture. Though it is just .1 cm of difference, I think the height difference between each disc is noticeable when you hold each of them in your hands. As I’ve discussed in these comparison posts, more height generally means more glide/float, and the P2 does have plenty of it, but the Meteor Hammer’s overmold helps it maintain its stability in the air for longer which results in a nice floaty flight on the putting green.
However, that straight stable flight makes the Meteor Hammer a bit less forgiving on the putting green, especially on longer putts. The P2’s added slight overstability makes it a bit more workable for trying to play for the slight fade into the basket. Of course, this isn’t necessarily a bad thing since if you put the Meteor Hammer on the right line, you don’t have to worry about it fading out too early or turning over unexpectedly.
The two plastic blends are noticeably different as well. The D-Line Flex 2 for the P2 is more of a traditional putter base line plastic while the Tortoise blend for the Meteor Hammer feels more like a premium driver plastic blend that might get a bit slick in the hands. Also, you can definitely feel the overmold joint spots on the top of the disc while you putt, which could be a distraction or cause a problem for your grip. 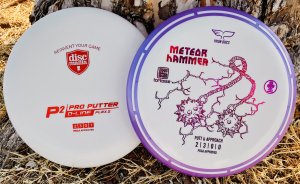 For more info on the format and scoring system I used to test these putters against each other, be sure to check out our main World Series of Putters post.
I conducted this match later in the evening at a local disc golf course on a permanent Innova Discatcher basket. There was a touch of wind that came into play now and then as a tail/cross wind. After warming up, I flipped a coin to see which putter would be thrown first for the first round, and it was the Discmania P2. Here is how it all played out:

It wasn’t the highest scoring affair, but the number 1 seed was able to squeeze out a win as the Discmania P2 defeated the Yikun Meteor Hammer with a score of 40 to 27. 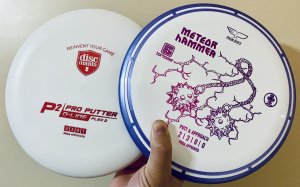 This definitely wasn’t my best night on the putting green, but I think the result was fair and a decent representation of the gap between these two putters for me.
I overall think the Meteor Hammer is a solid putter, but there are a couple of things that I think were holding it back for me. First of all, the overmold “joint” as I’ve been calling it. It wasn’t an issue on every single putt, but there were several times where I felt the disc coming off my hand with a little extra friction from this part of the disc leaving my palm/thumb. Most of the times I noticed this happening, the disc missed to the left.

The other concern with this disc for me is the slick more premium plastic. It wasn’t a problem with my grip on the disc, but it seemed to be a problem with the disc gripping the chains. The Meteor Hammer fell victim to several spit outs during my warm ups and two during the match. The spit outs in the match both hit near center then bounced out weak side. They were the kind of putts that could have spit out with other discs, but they definitely looked and felt like they should have stuck in the basket.
The P2 is a tall disc shape that I’ve generally been a fan of, so I expected to put up a better score than I did in this round with it. One aspect of this disc that I think may have impacted how I performed with it is the plastic blend. The D-Line Flex 2 is a bit softer than what I prefer in a putter plastic. It wasn’t a huge problem during the match, but I do think it impacted my overall confidence as I approached each putt.

The Meteor Hammer is an interesting disc that I think could be really nice off the tee, but for the putting green, I’d rather not navigate the overmold during the grip, so I’d have to recommend the Discmania P2 in this case.
The next match features the 8-9 matchup between the Discraft Fierce and the Thought Space Athletics Alter. Come back tomorrow for the results of that match.
5/5 - (4 votes) 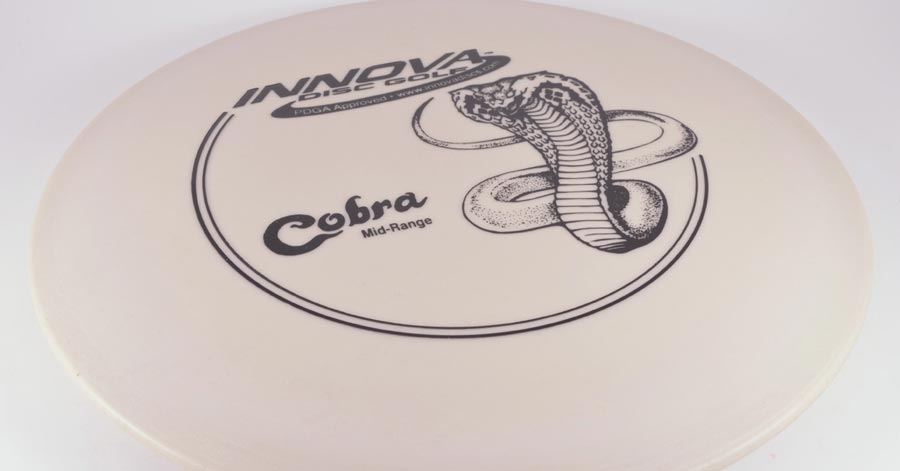 The Cobra is a mid range disc that comes in the inexpensive DX plastic. If you plan to play a round of night golf, you… 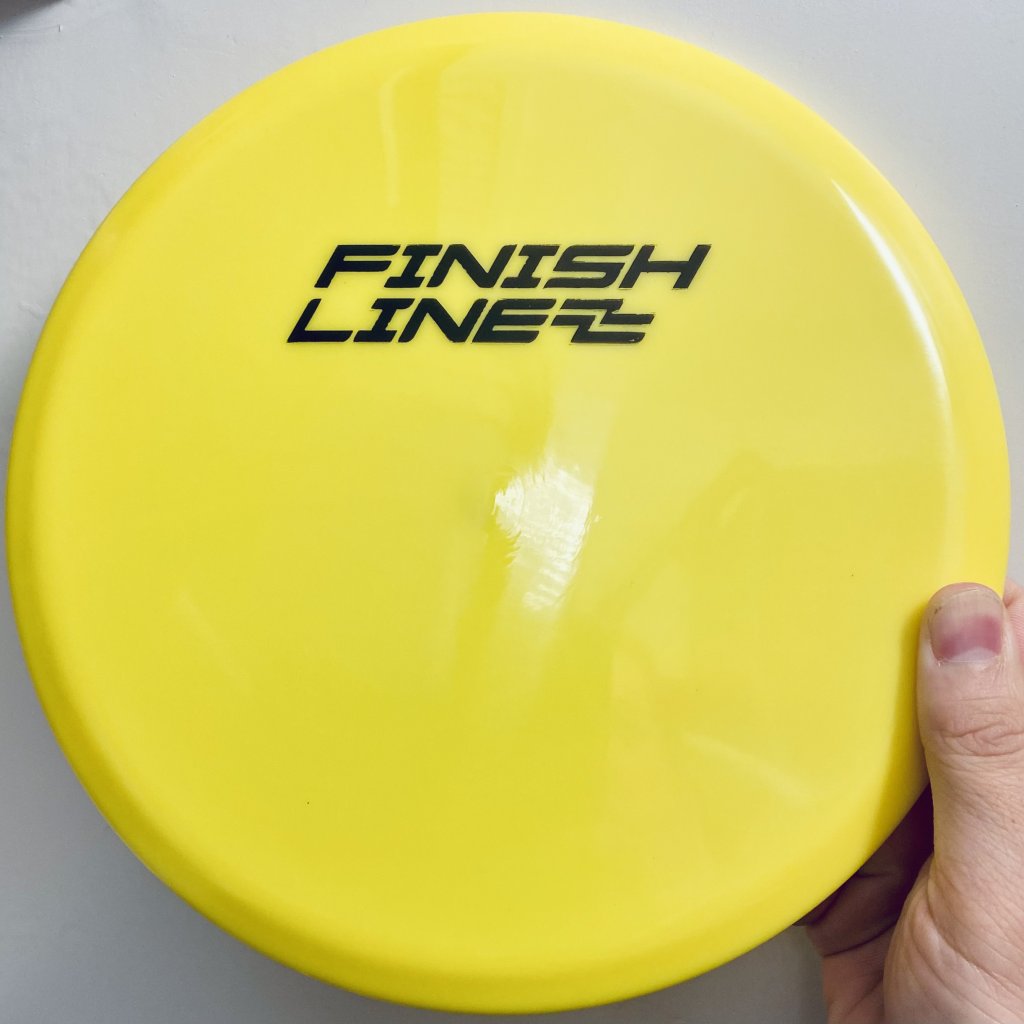