Just for fun, I’m going to share some very simple data with you which some folks might consider obvious, but other folks seem to consider quite mysterious. The question is simply, “which kind of disc golf discs sell the most?”

This isn’t a question about brand or model, but a question about the discs when divided into four simple categories that are most commonly used in the disc golf market: Distance Drivers, Control Drivers (also known as Fairway Dirvers), Mid-range Discs, and Putt and Approach discs (mostly known just as Putters).

While you could argue that are are sub-divisions within those groups, like “approach,” or “hybrid,” or “utility disc” etc. those are the four basic categories based upon disc speed, which is generally determined by rim width. The wider the rim, the higher speed the disc. So putters are the slowest speed, followed by midrange discs, then control drivers, and the fastest of all being distance drivers.

Infinite Discs provided sales data from January 1st, 2017 through June 18th, 2019 for just over 2 and 1/2 years of sales. The number of discs sold were divided into the categories and this graph shows the percentage of total sales that fell into each category: 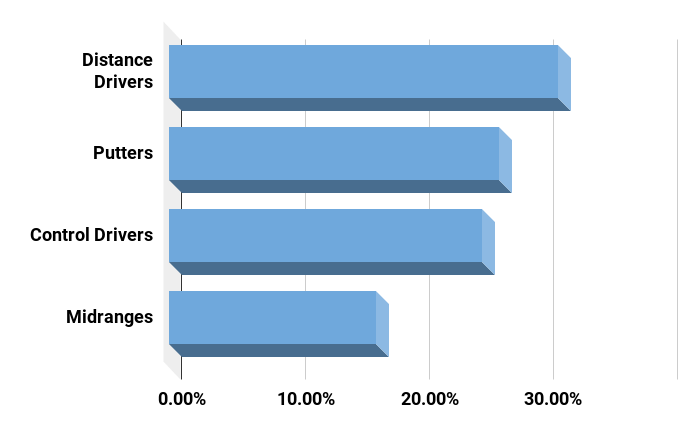 So, it would be true to claim that the distance driver is considered the sports car of the disc market, taking over 30% of all disc sales. That could be attributed to the fact that most players believe that acquiring some new distance driver will have the most revolutionary effect on their game. But it could also be attributed to the simple fact that players tend to lose more distance drivers than the other discs because they’re being thrown for the longest distances with the least amount of control– there’s much more room for error. Players are more likely to throw distance drivers into lakes or rivers than they are short-range discs like a midrange or a putter.

With that said, the putter takes the second spot right around 25% of total disc sales. Though they may not get lost as often, more players buy multiple putters for practice drills. Many disc golf players are probably right in their claim that the putting game is really the difference between amateurs and pros. To throw far is great, but if you can’t putt the disc into the basket consistently from short range, you’re still losing strokes.

The control drivers come in third, followed by the midrange discs which are the overworked and often under appreciated discs in the bag. They can be used with great results for a variety of shots and are generally easier to control than higher speed drivers. But either because they are not lost much or because slow discs simply aren’t considered as “impressive” to throw when you could pull out one of those flashy, new drivers, they make up the smallest percentage of total discs sold.

Feel free to share your theories in the comments about why distance drivers sell the most or what kind of disc you find most important in your bag.

2 thoughts on “What Kind of Disc Golf Discs Sell the Most?”