Without attempting to completely cover the ever-growing arsenal of distance drivers that are being released into the disc golf market, this article will pull together a respectable cross-section of popular distance drivers from several different manufacturers and look at how they fly.  We will focus on a few respective “bombers” that are available for your extra long drives, with rated flight speeds of “12” or higher.

Keep in mind, high-speed distance drivers only fly as far as you have the power to throw them. If you don’t have a powerful throw, then high speed discs will likely fly shorter distances than a disc that is more “tuned” to your arm speed. Slow arm speed doesn’t necessarily need to be a weakness in your game. Pick up some quality drivers with speeds ranging from 7-10 and you’ll get great results. As you move to higher speeds, you can compensate for the slower arm speed with more “understable” discs. For a good read on understable drivers, check out this article. This is one of the most fun distance drivers on the market, and a definite highlight from Westside Discs. However, it is pretty much agreed among disc golfers who throw the King that the flight ratings which are printed on the disc are wrong. It is given a 14, 5, -1, 4 rating. However, the disc (especially in beautiful Tournament plastic) is not nearly as overstable as those numbers would suggest. In fact, most people who throw a King would rate it something more like a 14, 5, -2, 2 and sometimes it even lacks much of a final fade at all.  I use the Tournament King as an understable distance driver, and a VIP King as a more overstable version when I want some fade at the end of the flight. But there is no arguing with the distance, as long as you don’t mind it pulling to the understable side on the way to your intended target. The Colossus was Innova’s answer to some of the popular 14-speed drivers that hit the market.  As a bomber, it certainly does the trick if you have the arm speed for it.  It has a really nice, understable pull upon release, especially in GStar plastic, which allows the disc to get a lot of extra distance before making a final fade back to the overstable side. It is a great S-Curve distance driver that can really stretch its flight with nice glide, allowing even amateur players to reach the 400 foot mark.  If you throw it in Champion plastic, you can expect the Colossus to be more overstable with an earlier fade.

With the Innova Destroyer  reining as the top-selling distance driver on the market for so long, it is inevitable that other companies will create  very similar discs. The DDX rim feels different than a Destroyer with a slightly sharper inner rim edge, but the flight characteristics are very similar, only with less fade than a destroyer. The DDX has a flight rating of 12, 5, -1, 2 which makes it an easy-to-control long-bomber for intermediate to advanced players. In a short duration, the DDX has already made its way into the hearts of players as a go-to distance driver.  Again, don’t expect it to be an easy-to-throw disc for new players, since this (along with most high-speed discs) takes some throwing power to get the desired results.

Vibram is an instant standout in any disc golf store because they make their discs of rubber, and any player can tell these discs are different to the touch. But once players pick them up and give them a fling, it is instantly apparent that these discs can fly!  The Lace is the best-selling Vibram disc and is their stable distance driver. Vibram has used a rather different and somewhat cryptic flight rating system, but most players rate this driver around a 12 speed. But regardless of rating, it is one of the easier distance drivers to throw, working wonderfully for players without a lot of experience.

For those who follow the distance records that seem to be broken every year in the windy conditions of the high desert, the Boss is one of the discs that has held one of those records with a throw by David Wiggins Jr. of 1108 feet. Of course, that doesn’t mean that everybody who picks up a Boss is going to set new, personal records, but it is a reliable and very popular distance driver by Innova. New players might find it hard to get this disc “out there” because it will fade earlier than desired. You need to have some experience and arm speed to get this 13-speed disc to go the distance.

The Havoc by Latitude 64 is one of those distance drivers that has stayed somewhat in the background, without a lot of attention. But it is a serious bomber that flies wonderfully for players of all skill levels.  With a flight rating much like the Innova Boss, you’d expect it to fade a bit more than it typically does. The Havoc can be a very nice straight flyer or S-curve flyer when thrown in a lighter weight, especially in Gold Line plastic. The user-friendly Havoc sort of took a backseat to the Ballista by Latitude 64 which is a beefier flyer that shines brighter with bigger, faster arms.

The Destiny by Westside Discs took off in sales to quickly surpass the popular King, because for a 14-speed disc, it is really pretty friendly to players who are still fairly new to the game. It has more of an understable release which allows it to take long, S-curve flights for maximum distance. More experienced players may find it too understable, until they throw it for huge, hyzer shots, which still achieve huge distance. For many players, the Destiny feels like a serious game changer when it comes to distance.  The sales of the disc at Infinite Discs didn’t only spike when it was a new release, but continued to gain momentum with time, which is always a good sign. That means that more people are giving it a try, talking about it, and discovering the distance potential of the Destiny.

MVP took a big step when they introduced a series of distance drivers with wider rims.  The wider rims allowed them to tackle the distance driver market with more competitive distance results, unleashing discs that have a speed rating higher than 12. The Catalyst is the more understable of the wider-rimmed series, which allows players without huge arm speed to really get this disc to travel. Whenever a distance driver caters to the bulk of disc golfers, most of whom do not have the throwing power of a pro, then the sales role in. Thus, the sales of the Catalyst quickly surpassed those of the other, more overstable high-speed discs by MVP like the Octane, Nitro, and Energy.

The Outlaw is a disc from Legacy Discs which instantly drew comparisons to the extremely popular Destroyer by Innova. The flight ratings are identical, with a 12, 5, -1, 3.  Legacy managed to not only create a hit with the similar flight characteristics, but added fuel to the fire with a series of limited edition stamps, introducing different “outlaw” characters on different editions, which later culminated in a stamp design that featured all of the characters together. They didn’t only know how to make a solid distance driver, but understood the collector mindset which would help create a cult hit. So, even when players weren’t necessarily buying the disc to throw, they were buying them to hang on the wall as decoration.

One of the newer members of the growing family of disc manufacturers is RPM Discs from New Zealand. As one of their first, core disc releases, they put out the Kahu, which is a superb distance driver that again draws comparisons to the Destroyer by Innova. In both Cosmic plastic (more translucent) and Atomic Plastic (more like Innova’s Star plastic) it has a really nice feel in the hand, and also presents a low profile, which is great for players who like flatter discs without too much dome.  It cuts through the air with nice speed and finishes with a solid turn. It flies especially well for forehand throwers, though backhand bombers would also find the results quite satisfying. RPM Discs also makes some really beautiful colors and attractive stamps, making the discs even cooler to add to your bag. The Kahu comes highly recommended as a distance driver for experienced players.

The Thrasher by Discraft is a unique, new release distance driver because it has an understable flight pattern, but without the tendency to flip over and role when thrown by more powerful arms.  That makes the disc useful as a distance bomber for newer players, but also a nice utility driver for experienced players.  It can make some serious S-curves and has a glide that seems to go forever. Along with the Undertaker, it is proving to be a popular new 2016 addition to Discraft’s huge entourage of discs. The longevity of its popularity is yet to be seen, but for now, it seems to be universally loved at first throw by most disc golfers who give it a throw.

For the players who want a beefy, overstable distance driver that will turn, no matter what, there is no need to look further than the recently released Defender by Dynamic Discs. Though it is overstable and proud of it, experienced throwers who can throw 350 feet or more will find that they can still achieve surprising distance with the Defender before it makes its dramatic fade.  Because of this hard fade, it will not be an easy disc for most beginning and intermediate players.  It can be used a wind-fighter when throwing into headwinds. It could also be used for power forehand throwers.

That is a quick look at some of the prominent distance drivers in the higher speed range, but certainly doesn’t cover all of them. 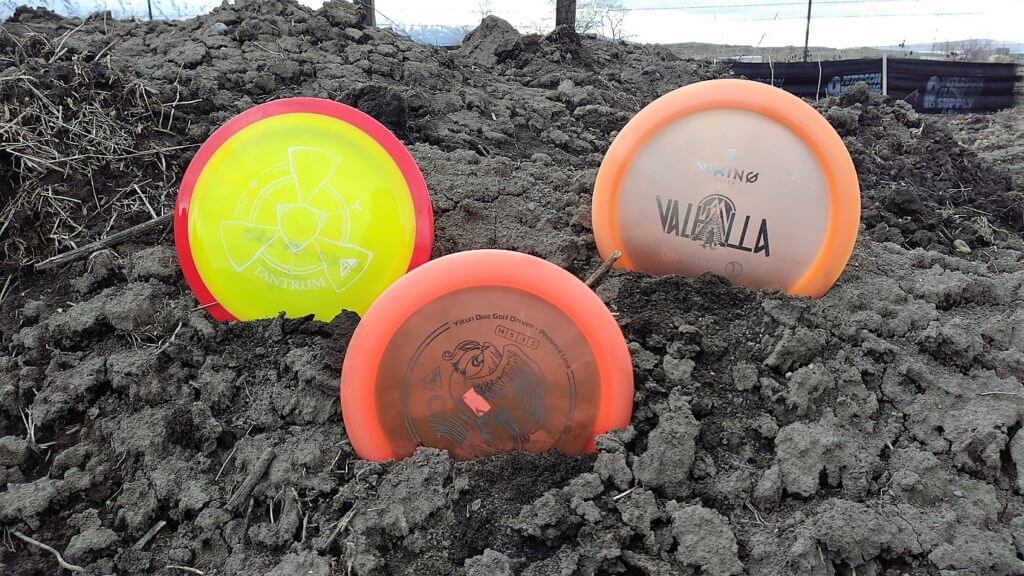 The understable driver is the key for giving average disc golfers more distance. When a disc doesn’t fly fast enough, it fades and loses distance.… 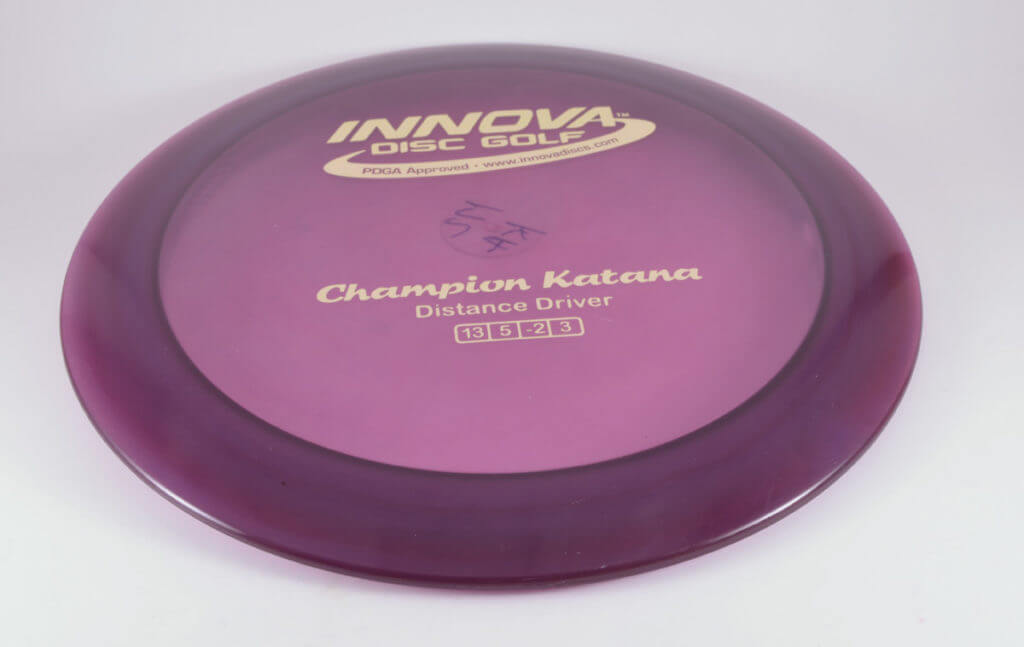 The Innova Katana is one of the more understable ultra high speed drivers available. With a turn rating of -3, this driver is not quite…

The Innova Firebird is an overstable distant driver with a lot of fade. Innova gives this disc a speed rating of 9, glide of just…