When my friend showed me the Amazon listing for Disc Eagle brand disc golf discs I had to try them out.

After seeing the price, number of disc included, and outrageously horrific advertising photos, I knew these would be terrible frisbee golf discs. But, it was worth paying the Amazon price for the set just to give a detailed review of just how terrible they really are. Now that I’ve paid the price, I can save you the money so that you don’t waste it buying this garbage being sold as golf discs.

By looking at the molds, it appears that the Disc Eagle Discs are simply a rip off copy of Divergent Discs in a substantially inferior plastic. The putter is an exact clone of the Narwhal, the midrange a replica of the Leviathan, and the driver is very similar to the Kraken.

How do they fly?

If you can get over the rock hard low-grade plastic, the putter and midrange are decent flying discs. The putter is a great stable flying approach disc. Like the Narwhal, it is really domey which is not my prefered shape for a putter but works just fine as a straight flying approach disc. The midrange, like the Divergent Discs Leviathan is very understable which is perfect for keeping low power shots relatively straight. The driver is ridiculously understable and utterly unusable for anyone that can achieve more than 150 feet of distance. The putter is the most stable of the discs and the only one that I can get some good distance out of. I was able to throw the putter on an almost completely straight line for almost 300 feet.

For the price, you might think you’re getting a better value with Disc Eagle discs vs. Divergent. This set comes in a pack of six rather than just three in the Divergent, but these six discs combined will only last a fraction of the time that without wearing out that the Divergent Discs will.

The first thing I noticed about the Disc Eagle plastic is absolutely terrible. It is a low grade TPE blend that is as stiff as a board. These discs are so hard they are unsafe to throw. They make a terrible clunking sound upon impact with trees or pavement. Because this plastic is so un-flexible there is no way that the PDGA will approve such a stiff plastic because stiff plastic is just dangerous. On my first throw with the driver, not realizing how understable it actually is, the driver flipped over completely and across the street. Fortunately, it didn’t hit any parked cars.

Not only is this plastic hard and uncomfortable to throw, but it wars incredibly quickly. If you hit a hard object such as a pole, fence, or tree trunk, the discs will immediately warp. Hit smaller objects like fences and watch huge divots form in your discs. This plastic also warps very easily if you hit a tree or other object.

Discs Sold by People Who Know Nothing About Disc Golf

From the looks at the Disc Eagle Disc images cropped in stock photos used on the Amazon listings it is pretty obvious that the Chinese distributers of Disc Eagle don’t have the slightest clue about disc golf. We’ll evaluate this hypothesis picture by picture. It’s really quite hilarious how ignorant the disc eagle advertising is. 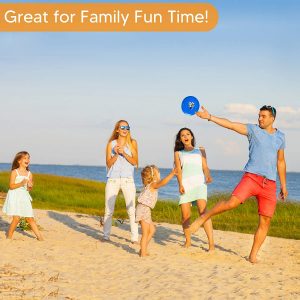 In this amazing Disc Eagle promotional picture it appears that the male figure is rolling a disc off his finger on the little girls head while at the beach. While most disc golf discs are not safe to use at a crowded beach, this rule is especially applicable with the rock hard plastic of Disc Eagle. And, if you are going to fool around with a golf discs at the beach, you’ll probably want to at least consider using a putter rather than a driver. I’m not sure how fooling around with dangerous objects like this around small children can be considered “Family Fun.”

This might be a good activity with a beach ball, but disc golf discs? If these people are supposed to be playing disc golf on the beach, I suppose that there are some courses on beaches in some places of the world, then why is it that only the Man has a disc? I mean, the set comes with 6 discs, every person in the image could have their own.

The likely answer is that the maker of this promotional image wasn’t easily able to crop fake disc eagle discs into the hands of the other people pictured while still making it look semi realistic, and they don’t even know how disc golf is played. 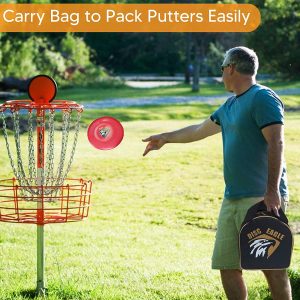 The next action shot is also as impressive as it is realistic. The caption tells us that it includes a great carry bag to “pack putters easily.” Why only putters? The set also includes two midrange discs and two drivers? In this image, the man is clearly playing a round of disc golf at a nice course by a river. Wouldn’t he want to also carry his other discs in the lunch box like bag? Do the putters need to stay in the bag and that is the reason he is putting with the midrange?

Yes it’s only a tap in, but his putting form could use some work. I’m guessing he just hasn’t joined the Disc Eagle VIP club yet as it’s usually not wise to throw a disc vertically into a Mach II.  It’s also rather interesting that he’s putting with the midrange. Personally, I also prefer this midrange for putting over the putter, but most new players that purchase a Disc Eagle set would probably putt with the disc that says “putter” on it.

Lastly, this man is tiny. Look at the size of the Disc Eagle bag compared to him. The height of the bag measures only 9 inches, so by my calculations this man is only 4 and a half feet tall. 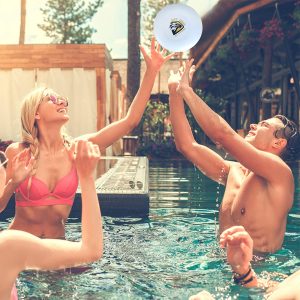 And my most favorite of all the promotional product images is the completely realistic pool scene.

No better pool activity than playing volleyball with a rock hard disc golf discs! And if you can afford a fancy swimming pool like this, you are probably going to purchase ultra low price budget golf discs for pool play right?

Unfortunately for the male model, using a two hand block technique doesn’t usually work well when a golf disc is falling vertically towards your face. Hopefully he brought his snorkel set to help him find the discs when they sink to the bottom of the pool, he may not know that these, like most disc golf discs do not float.

Why would you be promoting terrible golf discs for use that is not actually disc golf? Because you as the brand manager know absolutely nothing about disc golf yourself.

And, their English could use some help. 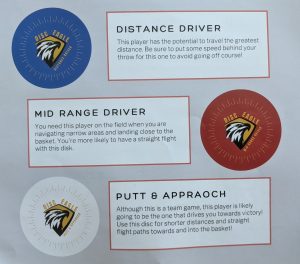 The Amazon package also comes with a pamphlet that tells you about disc eagle, disc golf rules, and how you can become part of the exclusive  VIP Club Disc Eagle team!

This pamphlet proves how ignorant the makers of this brand are. When describing the Disc Eagle putter the pamphlet says, “Although this is a team game, this player is likely going to be the one that drives you towards victory!”

I guess they are referring to the three different discs as a team? Disc golf is rarely a team game but is almost always an individual sport.

The description of the ultra understable fairway driver they call a Distance Driver reads, “This player has the potential to travel the greatest distance. Be sure to put some speed behind your throw for this one to avoid going off course!”

Since when does putting less speed make it more likely that you’re going to go off the disc golf course? From my experience, you’re usually more likely to stay on the course when you throw with less distance. I think they’re saying, as is the case with most distance drivers, you need enough speed to get the disc to fly the intended flight path. The irony here is that if you put any speed behind the Disc Eagle Driver the disc will turn ultra hard to the right and turn into an accidental roller that might even roll backwards towards you. 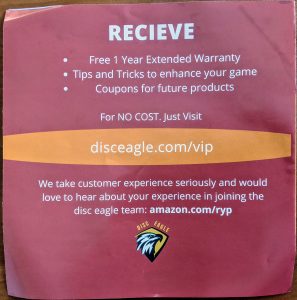 When you sign up for the “VIP Club” which you currently can’t because the website link doesn’t work. You “recieve” (I guess in this case I before E except after C doesn’t apply):

Positives of the Disc Eagle Set

The pro of this brand is that the multi color disc print actually does look pretty professional. The carrying bag appears to be made of decent material. There is no shoulder strap or water bottle holder or anything, but it might work well as a lunch box.

Overall, you should not even consider buying Disc Eagle Golf discs. By doing so you are buying junk and supporting Chinese companies who sell ripped off products that they know nothing about. Instead, please support disc golf companies that actually know what they are doing and are working to improve disc golf and disc golfers.

These discs are not quite as bad as the Franklin or Halex discs sets, but they are still pretty terrible and not remotely worth the cost even though you get six discs.

For a recommendation on good disc sets, refer to this article.