The competition is thinning out as we are already halfway through the Round of 16 of the Disc Golf Reviewer World Series of Putters! In this series, we are searching for the best putter in the world and hoping to provide the disc golf community with a plethora of information along the way to help everyone decide what putter is right for them. This is an NCAA basketball style tournament and project where every day I test two putter molds against each other on the putting green in a head-to-head competition before posting here about my experience and the results.

Today, we move to the Envy region of our bracket, where today the 1 seed Axiom Envy is looking to become the only 1 seed in the entire series to make it past the round of 16. Standing in its way and hoping to play the spoiler is the 12 seed Discmania Sensei.

To get to this point in the tournament, the Axiom Envy had to escape a close match with the 16 seed Millennium Omega (43 to 40) and then take down the popular 9 seed Latitude 64 Dagger in another close finish (64 to 61). The Discmania Sensei pulled off an upset in the first round with its win over the 5 seed Lone Star Disc Armadillo and then took care of business against the 13 seed Clash Butter. 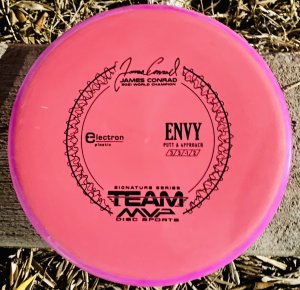 What I like most about the Envy would have to be the comfortable rim and shape of the disc. When the Envy was first released, I expected to be a more overstable shallow approach disc like the popular Westside Harp or Discraft Zone. It is a popular approach disc with a shape that is somewhat similar to those discs, but the Envy has a touch less overstability that helps to make it a bit more workable and versatile. Some might argue it isn’t a true putting putter, but as it has shown so far in this event, it is more than capable on the putting green.

And I think the Envy has a comfortable rim that is really nice for putting. Its beadless rim has a seamless feel even with its GRYO technology overmold that offers a smooth and consistent release. The Electron Envy we are using for this series is another thing I love. There is a stiffer Electron Firm Envy as well, but the Electron still has a very firm feel and grip that I’ve really grown to love. 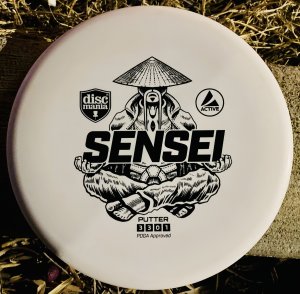 It’s maybe a simple answer, but I really like the height of the Sensei. I think I was somewhat surprised by how tall it felt. As is the case with most tall putters, the Sensei has a really nice glide and floaty flight that helps the disc hold its line for a bit longer, which comes in handy on longer putts.

The Sensei comes at a nice price as well, The Sensei is part of Discmania’s Active Line. The Active Line is made by Yikun in China and are designed to be a more affordable and beginner friendly line of discs. The Active Base Line plastic Sensei we are using in this series sells for almost a third of the price as some of the putters in this series.

The most glaring difference between these two discs is their height. If my memory is correct, 0.5cm matches the largest height differential in a putter match up so far in this series. As a result, I definitely noticed the taller Discmania Sensei had a tendency to stay up and resist its fade for a bit longer than the Axiom Envy. But I also wouldn’t say it was a big enough difference that I felt like I had to completely change my approach to each disc. I just simply knew on the longer putts I had to put a little more umph into the putts with the Envy if I wanted it to hold a similar line as the Sensei.
I mentioned that I liked the shape of the Envy, and I think that is an important difference here. When you look at the profile picture above, you can see that they actually have a similar shape, but the Sensei is just a touch taller.
You can also see the bottom of the Sensei’s rim bends in toward itself just a touch more than the Envy. That shape helps make the bottom of the Sensei feel a little more like a lip. Both of these discs are beadless, but that lipped feeling on the bottom of the Sensei is pretty prominent. I’ve mentioned in the previous articles that the Senseis I’m using in this series came with some pretty significant flashing along the bottom of the disc that made this lip feel even sharper. Flashing like this can happen and does happen with lots of manufacturers, and usually after a bit of use the disc will beat in and take care of it itself, but it is something worth making note of. 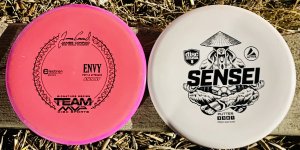 For more info on the format and scoring system I used to test these putters against each other, be sure to check out our main World Series of Putters post.
I conducted this match on a cool windless evening under a conveniently placed streetlight at my local disc golf course on a permanent Innova Discatcher basket. After warming up, I flipped a coin to see which putter would be thrown first for the first round of putts, and it was the Axiom Envy. Here is how it all played out:

The 12 seed Dismania Sensei got hot down the stretch, making 6 of its last 7 putts, but it wasn’t enough to catch the 1 seed Axiom Envy. The Envy wins and advances by a score of 63 to 56. 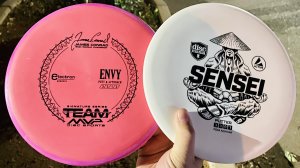 If you’ve been following along on the World Series of Putters, you might be surprised that I didn’t do as well with the taller Discmania Sensei as I did with the lower profile Axiom Envy. I would have been too, but I think everything I said above about rim shape and feel ended up being more important in this match.
This element of disc design and putting has been on the forefront of my mind in recent rounds. It’s not just as simple as beaded vs. beadless putters, but instead it should be about finding a rim shape that is conducive to a consistent grip and release point. The Sensei’s sharper feel on the bottom of the disc interfered with my release on a number of the putts. The way the Sensei impacted my release is similar to how I’ve expressed concern about certain beaded putters affecting the release as well.
It’s not that every putt with the Sensei or other similar shaped or feeling disc has a problem, but in putting, a consistent release is one of the most important elements any competitive disc golfer is looking for. It is hard enough to be consistent in your own movement and form, the last thing you want is inconsistency from your putter.
I’m not at all trying to bash the Sensei or say that the disc itself is inconsistent. It is a great disc, but for my grip and my form, I felt more confident with and got better results today from the Axiom Envy.

If you are a newer player looking to save a buck and still get a high quality putter, the Discmania Sensei is a great choice. But the one I would choose to use for my every day putting putter would have to be the Axiom Envy.
The last 1 seed in the tournament Axiom Envy will now await the winner of tomorrow’s match between the 7 seed Prodigy P Model S and the 11 seed Yikun Hammer. Come back tomorrow to find out who will be facing off in the Envy Region’s championship match.
5/5 - (4 votes)

The Discraft Surge is a moderately over-stable distance driver. Discraft gives it a stability rating of 1.7. It is similar to the Nuke, but with… 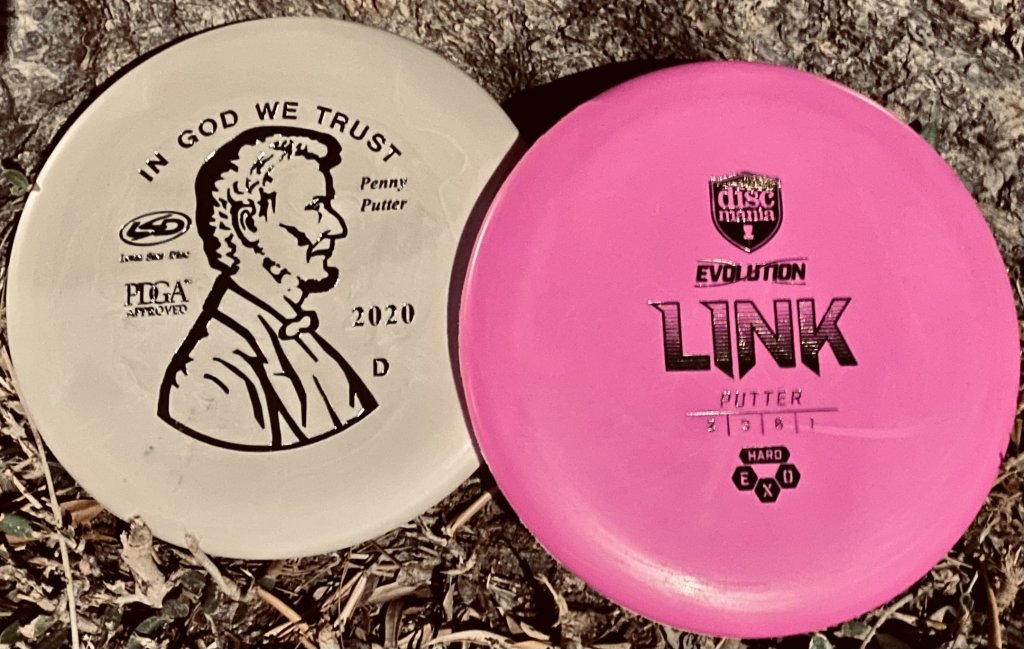